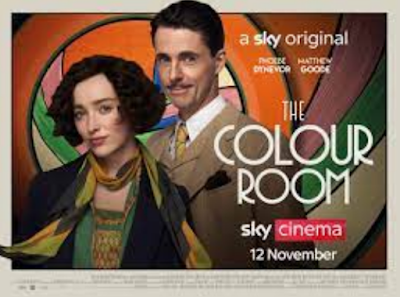 See: https://www.whattowatch.com/features/the-colour-room-with-bridgertons-phoebe-dynevorall-you-need-to-know-about-her-new-movie, one of many reviews of this film released a week or so ago by Sky Movies.
I don’t know if the BBC’s change in direction with regard to the coverage of art has occurred since the departure of Will Gompertz, the art critic we all loved to hate, but without doubt there must have been a decision taken for the BBC to disregard this movie - and I can’t puzzle out why.
The story is of a talented strong-minded woman in a man’s world of industry, who succeeds in revolutionising the hand-painted pottery style of the 1920s. Her ware is collected throughout the world, and has featured in countless editions of Antiques Roadshow, Bargain Hunt etc. Therefore, there must have been a concerted effort within the BBC to prevent reviews and features across their platforms. Plenty of other Sky productions have been celebrated on The One Show etc. The cast is strong - actors the BBC loves generally: Phoebe Dynevor starring alongside Matthew Goode, David Morrissey and Kerry Fox.
It seems, perhaps, that Clarice Cliff doesn’t tick a sufficient number of boxes - a strong woman is of late not enough in itself. Are we witnessing a creep of BBC anti-Englishness into the interwar years - beyond Empire?
The only source I can find when searching BBC The Colour Room is a short interview on Radio Stoke concerned with the location and filming.
Posted by Craig at 13:56