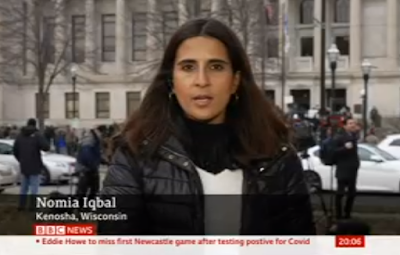 Jury member: We the jury find the defendant Kyle Rittenhouse not guilty.

Newsreader: Cleared of murder - American teenager Kyle Rittenhouse - who shot dead two people last year during protests against racial injustice.
Newsreader: An American teenager who shot dead two people during protests against racial injustice in Wisconsin last year has been found not guilty of murder in a trial that polarised opinion in the United States. Kyle Rittenhouse argued that he had feared for his life and acted in self-defence. Prosecutors said he had behaved like an armed vigilante. The case has provoked a heated debate about gun ownership. Our correspondent Nomia Iqbal reports now from the city of Kenosha.

Judge: The defendant will rise, face the jury and harken to its verdicts.

Nomia Iqbal: A dangerous vigilante, or someone acting in self-defence? After 26 hours, the jury decided Kyle Rittenhouse's fate.

Jury member: We the jury find the defendant Kyle Rittenhouse not guilty.

Nomia Iqbal: The 12 men and women of the jury accepted the teenager's claim that he killed out of fear for his safety.

Man outside court: Somehow, some way, those 12 jurors found that he was innocent.

Nomia Iqbal: Outside court, the political divisions this case has caused were clear.

Black man outside court: There is no way in a land of law where a person can shoot three people, kill two of them and be acquitted. There's just no way.

Nomia Iqbal: The shooting happened against the backdrop of nationwide protests over racism and police brutality, following the murder of George Floyd. In Kenosha, another black man, named Jacob Blake, had been shot by police seven times and on the third night of riots Kyle Rittenhouse entered the city. He said he came to provide security.

Kyle Rittenhouse: If there's somebody hurt, I'm running into harm's way. That's why I have my rifle because I have to protect myself obviously.

Nomia Iqbal: In a series of confrontations, he shot dead Joseph Rosenbaum, who had chased after him into this car park. He then killed another man, who ran after Rittenhouse, thinking he was an active shooter. A third man survived. Police later arrested the teenager and charged him with murder. At his trial, there were tears, challenges,...

Thomas Binger, prosecutor: When you point the gun at someone else, that's going to make them feel like they are about to die, right? That's what you wanted him to feel.
Kyle Rittenhouse: No!

Nomia Iqbal: ...shouting by the judge...

Judge: Don't get brazen with me!

Nomia Iqbal: ...and a controversial defence by his team in regards to the shooting of Jacob Blake.

Mark Richards, defence lawyer: Other people in this community have shot somebody seven times and it has been found to be OK. My client did it four times in three quarters of a second to protect his life from Mr Rosenbaum. I'm sorry, but that's what happened.

Nomia Iqbal: This case has become a big flash point on gun rights. Some see Kyle Rittenhouse as a hero, for others he is a reckless teenager and a symbol of a gun culture out of control.
Newsreader: Nomia is in Kenosha live for us tonight. This is a case that's been gripping America really. What's been the reaction tonight to this verdict?
Nomia Iqbal:: Well, the reaction has been division. This case has pulled together some of the most explosive issues in America, the right to bear arms, protest, racial injustice. There were civil rights protesters outside the courthouse who said if Kyle Rittenhouse had been a black teenager and had shot at three white people the police would have behaved very differently that night. The National Guard is on standby just in case there is any violence. President Biden has reacted. He has said that the verdict will leave many Americans feeling very angry and concerned, including himself, but he has urged people to respect the verdict. Kyle Rittenhouse has reacted. He has said he is remorseful and wants to get on with his life. For others it may not be so easy. The family of one of the men shot dead that night has said that this not guilty verdict sends a dangerous message that any armed civilians can show up in any town and justify shooting people. So this political divide that we know exists in America on gun control, and gun ownership, has, tonight, got even deeper.
Newsreader: Thank you very much indeed.
Posted by Craig at 10:05