I know that political Twitter is often a blood sport, and that only a surprisingly small minority of the public ever bothers with Twitter at all, but it a favourite haunt of many of my least favourite BBC journalists.
And do you get delightful cat videos and opportunities to vote on whether the 3-voice, 4-voice or 5-voice mass settings by your favourite Tudor composer you prefer.
One quirk of my Twitter feed is that, over the years, I've 'followed' the following four people: James Delingpole, Maajid Nawaz, Sunder Katwala and Shayan Sardarizadeh.
You may know them all already [especially as they've all featured on the blog before], but I'll introduce them nonetheless:
James is a conservative who thinks nearly everything being done in the name of Covid and climate change is a scam. Maajid is an ex-Muslim extremist turned Lib Dem broadcaster who shares some of James's takes. Sunder is a left-liberal think tanker who really doesn't like Maajid. And Shayan is an impartial BBC journalist from  Mike Wendling's BBC Trending/BBC Disinformation Unit with a strong interest in QAnon who works alongside the famous Marianna Spring and often 'likes' in tandem with her on Twitter.
I'm happy to follow all of them, being broad-minded, even though all four of them irritate me from time to time. I like to hear what interesting people like this are saying. So this today is like a rare astronomical conjunction of planets as it features all four of them together: 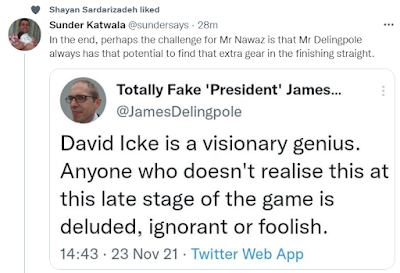 There's James doing his thing, and jumping more sharks than Evel Knievel doubling for The Fonz in a David Attenborough documentary about sharks.
And there's Sunder doing his thing and bullying Maajid for being guilty by association.
And there's Shayan, the impartial BBC guy, doing his thing and impartially taking sides on the same side he always takes by 'liking' Sunder's attack on Maajid and James.
What are they like!
Of course, James Delingpole, Maajid Nawaz and Sunder Katwala aren't bound by the BBC's guidelines on impartiality. They can 'like' what they want, unlike Shayan Sardarizadeh.
Those pesky BBC editorial guidelines don't stop Shayan though!
Tim Davie can 'talk the talk' as much as he likes about BBC staff's impartiality-busting on social media because the BBC's been promising to clean it up its act on that front for years now, and yet here we are again.
Posted by Craig at 17:25