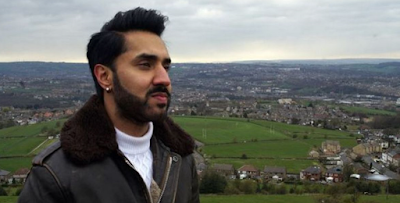 BBC journalist Mobeen Azhar has featured here at Is the BBC biased? quite a few times before.

His first appearance came after the 2015 general election where he used his BBC-branded Twitter feed to say of the Conservative victory over Ed Miliband's Labour, "Great result unless you're poor / old / vulnerable / a single parent / not obsessed with money. Well done #selfishBritain #GE15", which I didn't feel was entirely within either the letter or the spirit of BBC impartiality. (He subsequently deleted it).

Sue (also in 2015) caught him being rather too enthusiastic about 'Jeremy Corbyn mania' for Radio 4 and the BBC News website.

He then (once more in 2015) appalled both me and Sue with his contribution to one of the worst BBC programmes I've ever heard, an edition of BBC Trending that turned into a hatchet job on Maryam Namazie from the Council of Ex-Muslims. Maryam, who'd already received death threats from Muslim extremists, found herself - in absentia - being traduced by a couple of BBC reporters. Mobeen found her language about Islamists "quite problematic" and mocked her for winning the 'Secularist of the Year' award. (In fairness, the BBC host was much worse).

We then rather lost sight of him until March this year when he presented The Satanic Verses: 30 years on for BBC TV. This was the programme where he said he himself religiously made sure his own copy of the Koran remains in an elevated position (on a high shelf) in compliance with Islamic rules but ended up stunned and appalled after Muslims in Bradford aggressively took against him and his copy of The Satanic Verses. One very angry Muslim man snatched the book, ran off and tried to burn it. It was certainly dramatic TV. Tommy Robinson got slated by Mobeen, and Hope Not Hate were on to worry about the far-right, but it also - unusually for the BBC - showed Muslims in a bad light. Sue commented:

The most significant moments for me, however, were conversations with some elderly British Muslims who had no intention of conforming in any way shape or form to British values and customs, and frankly didn’t see why anyone might expect them to.

I mention all of this because "award-winning" (hipster-looking, quiff-sporting, Chemsex-reporting BBC Muslim) Mobeen has again been put centre stage by the BBC with a new six-part BBC TV series called Hometown: A Killing:

Award-winning journalist Mobeen Azhar moves back to his hometown of Huddersfield to cover the death of Mohammed Yassar Yaqub but realises that there is a much bigger story in town.

This morning's Sunday programme on Radio 4 discussed Hometown: A Killing because members of the Pakistani Muslim community have complained about it being soooo unfair for showing their community to be heavily and disproportionately involved in violent drug-related crime in the town.

Sunday debated it with Mobeen himself and an aggrieved Muslim leader from Huddersfield who argued, in the usual way of things, that all communities do nasty things, so why single out Muslims?

(The aggrieved Muslim leader from Huddersfield was oddly gentle about it though and prepared to concede points. On listening back I wasn't surprised to hear that he's Ahmadiyya.)

One theme discussed was that putting such a focus on Muslim community criminality could be exploited by the anti-Muslim far-right.

Mobeen said it's not just anecdotes but facts and that there is a massive problem with Pakistani Muslims in Huddersfield and violent drug-related crime.

And he said that numerous Muslims involved in the crime have told him that it's not a problem because the hadiths says that it's OK to sell/do bad things to unbelievers...

Now, I will admit that I was truly taken aback by him saying that, especially on Radio 4's highly PC Sunday.

Alas he then went and spoiled it all by immediately saying and repeating and then re-repeating the point that these Muslim men aren't "pious Muslims", and that he himself doesn't even consider them "real Muslims".

(One step forward, at least one step back then).

Still, the lad is obviously trying to do some right things and say it as he sees it, and his being at the highly PC BBC is probably hindering his ability to grasp the doublethink in his thinking and his reporting, given that I doubt anyone there would ever think of pointing out such things to him.

Mobeen's BBC reporting makes for a fascinating case study in BBC bias.
Posted by Craig at 18:47