Annihilation for the nation 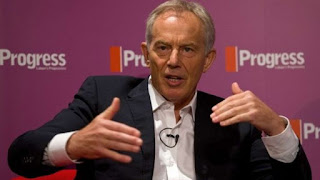 The BBC is heading this morning’s news bulletins with Tony Blair’s somewhat alarmist comments about what will happen if Jeremy Corbyn wins the Labour Party’s leadership contest.
“Over the cliff’s edge!” and I don’t think he was talking about Cliff Richard.

“Please understand the danger we are in. The party is walking eyes shut arms outstretched over the cliff’s edge to the rocks below”

However, as it has been stated on more than one occasion, anything that emanates from Tony “Bliar” has the opposite effect to that intended. He’s seen as toxic. 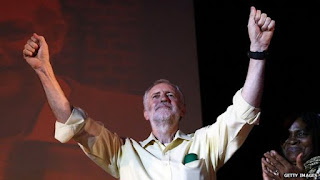 “Criticise Corbyn and you make him stronger. That's been the fear of so many who believe he'd spell disaster for Labour.When Tony Blair - arch-enemy of the party's left - says a Corbyn victory could mean annihilation, they wince.If you love Corbyn and hate Blair, they argue, that won't change your mind.”

If that’s really the case, might not the BBC consider holding back on the criticisms? That’s a classic no-win scenario.
This morning we heard Jack Straw explaining that Corbyn’s quantitative easing idea was rubbish.  Everyone but Dianne Abbott and Ken Livingstone says Corbyn’s ideas are old hat. They’re retrograde principles that have proven disastrous whenever and wherever  they’ve been tested.

The BBC’s Mobeen Azhar asks ”Where is Labour’s ‘Jeremy Corbyn mania’ coming from?” in a kind of reverse echo of Gillian Duffy’s infamous “Where are they flocking from?”
"All over the country we are getting these huge gatherings of people. The young, the old, black and white and many people that haven't been involved in politics before."

For more on Mobeen I turned to Twitter.
I gather his current area of expertise is ‘chemsex’ (gay). There’s a fetching photo of Mobeen intertwined with Jon Snow at the One World awards. I don’t know anything about chemsex (gay) or the One World awards therefore I only know a tiny bit about Mobeen Azhar, but did spot that on April 1st he Tweeted “Palestine joins the ICC at last!”, so I think we can safely assume that he’s going to find nothing disturbing in the fact that all these Corbyn enthusiasts, political virgins that they are, seem perfectly content to ignore Corbyn’s affiliation with Hamas and Hezbollah, his friendship with Stephen Sizer and so on.

The combination of idealism and political illiteracy that have always afflicted the young and immature inevitably produce confused passion and turbulence. We all go through an anti-capitalist and anti-corporate phase when we’re young till we become resigned to the fact that it’s a by-product of not being totalitarian.
No wonder there are people who hate ‘the rich’ even if some of them are not short of a bob or two themselves.

What is most disturbing of all is that the BBC has always shied away from challenging Corbyn over his antisemitic affiliations. Whether they are ideologically pro or anti the prospect of a  Corbyn led Labour Party, they avoid dwelling on it because they regard it as irrelevant. Why stir up an unnecessary hornet’s nest, when no-one but the capitalist moguls of the Zionist lobby gives a toss?

This is why they steer clear. It’s because these days there’s such a climate of Israel-hate in the world, that exposing its existence in a politician is neither here nor there. In fact the opposite is true. If there was no evidence of Israel-hate, it would be a hindrance to that politician’s electability. In terms of voter appeal, absence of antisemitism makes the heart grow fonder.

Look at this Open Letter to Jeremy Corbyn by Alan Johnson, a pro-Israel advocate, and therefore speaking with a voice marginalised by the swell of public opinion. The letter was published in June, before the mania really took hold, so it was effectively pissing in the wind.

“But you won’t get my vote.
You won’t get it because Labour’s best traditions also include anti-fascism and internationalism while your support – to me, inexplicable and shameful –  for the fascistic and antisemitic forces of Hezbollah and Hamas flies in the face of those traditions. In particular, your full-throated cheer-leading for the vicious antisemitic Islamist Raed Salah is a deal-breaker.Why did you lend your support to Raed Salah? No, he is not a ‘critic of Israel’, but a straight-up Jew hater.”You said ‘Salah is a very honoured citizen’, even though Salah was found guilty of spreading the blood libel – the classic antisemitic slander that Jews use the blood of gentile children to make their bread.”

I gather Alan Johnson is a lefty. If the Left Foot Forward readership won’t be influenced by him, what hope is there that the Daily Mail will have any effect?
Their lavishly illustrated revelations are greeted below the line with a load of derogatory comments about the Daily mail.

“Every summer, the French capital turns the banks of the Seine into a makeshift beach known as Paris Plages and has this year devoted each day to a famous beach around the world.”

Well, the Mayor, Anne Hidalgo has designated Thursday (today) Tel Aviv day. Needless to say the pro-Palestinian lobby are up in arms!
Perhaps as a gesture to France’s beleaguered and dwindling Jews, the Mayor and her deputy have “courageously” stuck to their guns. The left wingers have plenty to say, citing the obvious to justify their outrage.

“Critics said the timing of the tribute to Tel Aviv was particularly ill-advised, coming after a Palestinian toddler burned to death in a 31 July arson attack in a West Bank village, suspected to be the work of Jewish extremists.”

Defending Israel is not what this is about. Not at all.  “I could never regard a city as responsible for the policies of a government” says the mayor.  “To do so would be to show contempt for ...democracy”

It’s solely about Tel Aviv, because it’s gay-friendly and everyone likes falafels. 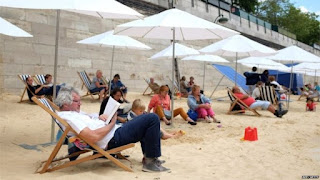 I would contend that over the years the BBC has systematically helped create a kind of united hatred of the Israeli government. The BBC's ‘half a story’ policy has been irreparably damaging. In fact fatal.

It no longer matters whether reality is pointed out or not. The BBC ignores its critics and behaves as if it’s infallible.
Jeremy Corbyn can be hand in glove with virulent antisemites and his supporters don’t turn a hair.


It’s hardly surprising that Israelis have given up any hope of a sympathetic hearing. The demonisation has gone too far. There’s no turning back.