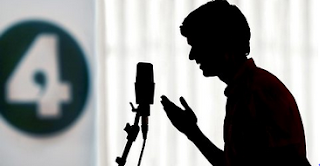 One of the clearest demonstrations of where BBC Radio 4 is coming from came from that remarkable three-and-a-half-year run of  episodes of Friday night's A Point of View, where (despite lots and lots of passing political opinions - quite a lot of them strongly left-wing ones) not one speaker spoke from a right-of-centre perspective until Roger Scruton came along.

My quip at the time was that A Point of View graphically demonstrated BBC Radio's own point of view - not that it was really a quip, more a statement of fact.

The other BBC Radio 4 regular that invites such quips is Four Thought - the 13-minute weekly Wednesday night spot (that, very occasionally, spills out into other spots on the network).

Listen to it regularly or look back through its extensive archive and you'll find, beyond even the slightest glimmer of a doubt, that Radio 4's Four Thought is overwhelmingly (nay, almost exclusively) dominated by left-of-centre voices and left-of-centre preoccupations. The 'BBC bias' is palpable and somewhat outrageous.

That's not to say that all episodes of Four Thought are left-of-centre politically, because quite a lot of them aren't political.

But, nonetheless, a heck of a lot of them are - and a review of the 187 episodes currently available shows that, in contrast to many clearly expressing left-of-centre views, next to none express obviously right-of-centre views (especially the recent ones).

Please just review the Four Thought archive for yourselves though.

On, say, the public's hot topic of the moment - immigration - you'll see that all the programmes dealing with the subject have featured strongly pro-immigration voices or positive stories about immigration. The views of the vast bulk of the public, as shown by opinion poll after opinion poll who express reservations about mass immigration, are entirely excluded.

Isn't that remarkable for a publicly-funded broadcaster that's meant to represent the broadest range of British public opinion?

Now, none of this is to say that many of these programmes aren't interesting and rewarding. Many of them are. Some, indeed, have been fascinating and wonderful. It's just to say that the programme, as a whole, has a massive leftwards bias.

For example, just working back through recent episodes,...

...this week's edition featured someone complaining that black women are still under-represented on British TV.

The previous week had a pro-immigration academic talking about how we need to think differently about citizenship.

The week before that had an anti-big business type denouncing 'big charity' for being too like big business.

The previous two episodes were apolitical. The week before those, however, had a Quaker speaker questioning the value of success, ...

...preceded by a Muslim speaker 're-interpreting' British responses to terrorism,..

...preceded by a left-leaning commentator making the "progressive case for authority",..

...preceded by pieces calling for reform of animal welfare, describing how feminism can be reconciled with Islamic faith, telling of how a Yemeni got stranded in London, complaining that there's a "prejudice" against East European migrants, arguing that drugs should be legalised...

You can check all of this out for yourselves. I'm not in any way exaggerating. (If you think I am, please show me why).

Yet another QED regarding BBC bias, I'd say. Wouldn't you?
Posted by Craig at 21:29