Articles about Jeremy Corbyn are pretty well clogging up the internet and most people agree by now that the successful outcome of his leadership bid is a foregone conclusion.

Politically illiterate or naïve Corbyn voters, many of whom must be too young to know any better, might well be seduced by his socialist economic policies, his appealing anti-austerity plan, his idealistic, retro anti-war / CND stance, but not everyone has fallen for the “you must talk to those you profoundly disagree with” theory, since it is perfectly clear that this is not something Corbyn has actually done himself.

When he appeared alongside Israel’s would-be obliterators and sat beside them at their meetings and rallies he might have been talking to (or with) them, but there was no indication that he disagreed with them, profoundly or otherwise.

I do remember Sarah Montague strongly advocating this very theory (“we must talk to Hamas”), but I don’t think even she meant we must align ourselves with Hamas. She meant reason with them and persuade them to behave nicely. Perhaps politely ask them to ‘lay off the terror, and tone down your genocidal charter’ etc etc. Of course that would require rationality and a certain amount of integrity on Hamas’s part, and I don’t think many people outside the BBC would credit Hamas with either.

It is the BBC’s persistent refusal to take the irrationality of fanatical Islamic beliefs into consideration when they promote their right-on ways of interacting with Hamas. They merely project their own rational and reasonable responses onto Hamas and the Palestinians as if they were all members of the same liberal left-leaning intelligentsia. Friends.

Philip Hammond’s attitude to the deal with Iran involves similarly dubious justifications and rationalisation. In his interview with John Humphrys -  “put aside Israel for a moment”  - Hammond claimed that there were areas where the two sides were in agreement, eg., opium traffic and ISIL, and areas where they were not - human rights in Iran.

He said it was helpful that they could share, at least, some common ground.

“Where we do not see eye to eye with them is over Israel, and that’s because they want to destroy Israel”

Humph says: “Yes, if you listen to Rouhani  - but not if you listen to what the grand Ayatollah has to say - since the agreement was reached  - he’s in charge, and he still talks about ‘death to Israel’.

"We should distinguish between what Iran actually does in the conduct of its foreign policy.We should judge people by their actions rather than by their words. “What we’re looking for is behaviour towards Israel - not only towards Israel but towards other players in the region that slowly rebuilds their sense  that Iran is not a threat to them. If we don’t talk we will not be able to influence them.”

“Is the need to deal with Islamic State blinding us to Iran’s faults?” suggested Humph.
“No we’re not blind to the risks that Iran can destabilize the region through its sponsorship.” was the reply.

Surely Iran’s activities, its sponsorship of Hezbollah its funding and smuggling of arms to Hamas and all the rest of it, is ”its behaviour”.  In other words that is “the conduct of its foreign policy”. How does that translate into any kind of sense that Iran is not a threat to Israel, or indeed the other players in the region?
That’s what I wanted Humph to point out in his otherwise promising line of questioning.
Will the lifting of sanctions merely lead to more aggressive, better funded, destabilising behaviour, and if so what will be done about it? 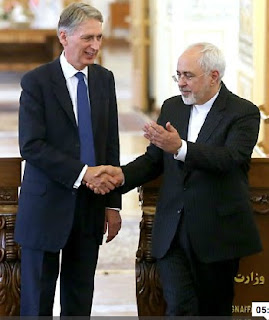 When Jeremy Corbyn trots out “you must talk to those you profoundly disagree with” to justify his habitual hobnobbing with Hamas, Hezbollah and Holocaust deniers, one really needs to examine what ‘talking to’ even means in that context. That’s where the BBC falls short.
Are we supposed to think that as an important figure in the PSC Corbyn has been furiously debating with Hamas and Hezbollah rather than echoing their position and virtually proselytising for them? Debating and arguing is so patently obviously not what he was doing.

Everything he’s done, his voting, his friendships, his speeches, indicate that the parties he profoundly disagrees with are not Hamas or Hezbollah, but the Israelis. Has he talked to the Israeli government? Has he called Netanyahu his friend?

Which of our sharp, shrewd, penetrating interviewers from the BBC has pressed him on this?