The jokes on them. Or us.

Newsnight viewers have been treated to many such features in recent weeks. Out of the last seven editions of Newsnight six of them (yes, 6/7) have focused on the subject of Labour leadership contest (this Wednesday's edition was the exception to the rule).

Last night's programme focused on the issue of entryism (again).

The aforementioned Pete said he'd voted Labour up until the Iraq War and only voted Green in 2015 as a protest vote. He'd return to Labour like a shot if Jeremy Corbyn became Labour leader and might even become a member again. Unfortunately (for him), Labour have rejected his vote, suspecting him of entryism.

A quick bit of Googling shows that he's not just some random voter though. He's actually the Pete Sinclair who co-wrote one of my favourite BBC comedies (with Jack Dee), Lead Balloon.

And he's also a writer for Have I Got News For You and Mark Steel's in Town. (Does he write all their anti-UKIP jokes?)

It's odd that Newsnight didn't give its viewers any background information on Peter Sinclair, isn't it? Kirsty merely introduced him as something whose vote was rejected by the Labour Party and he was also merely captioned by Newsnight as 'Pete Sinclair, Excluded from Labour Leadership contest'.

Also, it's a small world, isn't it? Kirsty Wark of the BBC interviewing former BBC Berlin correspondent Ben Bradshaw and Pete Sinclair, writer for the BBC (among others), about the Labour Party?

Incidentally, I see (from Pete Sinclair's Twitter feed) that he was also on the Victoria Derbyshire show today, appearing as a "life-long Labour supporter" (well, according to the BBC feed anyhow): 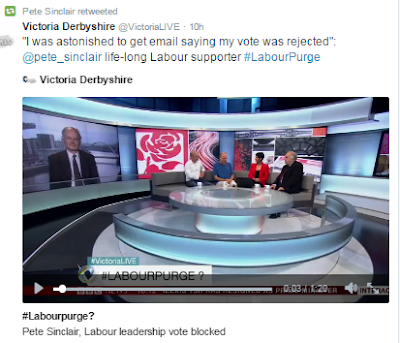 But at least Naga Munchetty gave BBC viewers a bit more information about him, calling him a "comedy writer" (though nothing to connect him to the BBC in any way, shape or form).

On a similar theme (as some of you might already be aware), another BBC left-wing comedian, Jeremy Hardy, has had his vote for Jeremy Corbyn rejected by the Labour Party too and appeared on the BBC complaining about it.

More revealing than with Pete Sinclair, the BBC website actually introduced him with the words:

A left-wing comedian has said he was told by the Labour party that he could not vote in its leadership election.

Poor Jeremy. Not getting his vote for Jeremy counted. Oh dear. Snigger.

Update 23.38: Actually make that 7 out of 8 of the last editions of Newsnight that have dwelt on the Labour leadership contest. Tonight's Newsnight also led on it!

And, for good measure, our Kirsty was talking about it with former Scottish Labour leader Jack McConnell, with whom - as you may remember - she got into a spot of serious bother a decade or so ago (over concerns about bias), after going on holiday with him.