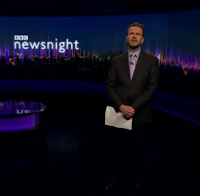 I have to say that James O'Brien isn't growing on me as a Newsnight presenter.

I don't appear to be alone. In recent days I've seen his interview style described (on Twitter) as varying between "patronizing questions and leading questions" and his "modus operandi" in general being characterised as "abuse, smearing and pretending he is some kind of genius". Others have been less kind.

An example of JO'B's use of leading questions could be seen with his interview on Thursday's Newsnight with John Dalhuisen of Amnesty International on the migrant crisis - or "refugee" crisis as Mr Dalhuisen terms it. ("So the only way that this could be assuaged is for them to be, for want of a better word, welcomed?").

Contrast that with his later interview with UKIP's Douglas Carswell, where he pounded away, repeatedly interrupting, trying to make the point that people in low-immigrant-dense constituencies tend to be (unreasonably) anti-mass immigration. Or with his relentless interrupting of Corbynite Labour MP Cat Smith on Friday's edition.

[Vis-à-vis our Cat, our next-door-neighbour MP for Lancaster...she sounded surprisingly cocky for someone who squeaked in as a Labour MP, just defeating the sitting Tory MP (despite polls predicting she'd win by an absolute landslide)...and she only managed that thanks to the total collapse of the Lib Dems, the sharp rise of UKIP and most Lancaster voters not having the slightest clue what she actually stands for.]

Now, maybe Cat and Douglas deserved to be relentlessly interrupted by James O'Brien (they weren't admitting what he wanted them to admit), but I always think it's very bad form for a BBC interviewer to do what JO'B did to Mr Carswell on Thursday - namely contradicting him and not allowing him to respond, moving onto the other guest and changing the subject:

Douglas Carswell: We often argue in UKIP that we need an Australian type system of immigration. That is to allow us to choose people with the skills we need to come and work here and contribute. If you look at the detail of some of these figures it shows that for every one non-EU job created over the past year there have been 35 EU jobs created. That clearly suggests - unless anyone's going to suggest that Europeans are 35 times more able - it clearly suggests that actually the system we have at the moment is preventing us from recruiting the brightest and the best from around the world.

James O'Brien: And, of course, if you look at the detail of the Australian points system you'll see that in per capita terms the rate of immigration is about twice as high as it is into Britain at the moment....

Douglas Carswell: It, it...

That's a BBC interviewer forcing his views on his audience, isn't it? 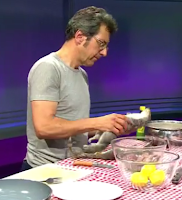 Anyhow, at least we can take some satisfaction in seeing 'hard man' James O'Brien's obvious discomfort later in that same edition on having to eat a dead squirrel live on TV.

That was when Newsnight well and truly jumped the squirrel.

And it did so courtesy of Newsnight editor Ian Katz's old chum at the Guardian, George Monbiot.

It's not the first time Ian has invited George onto the show to air his latest moonbattery. His plans to expunge the Lake District of sheep and 're-wild' the fells got him an invite soon after Mr Katz took over. And here he was again, following on from his latest piece in the Graun extolling the thrill of eating a recently-deceased grey squirrel and his parallel dislike of conventional animal farming.

So there was the Moonbat himself, wielding an axe and butchering a squirrel live on BBC Two, with James O'Brien looking on and then trying to eat 'one we prepared earlier'.

James introduced George Monbiot, at the start of the show, as "the nation's favourite environmentalist".

As this is a smorgasbord, I really ought to include something about Sweden.


Anyhow, matters Swedish came to the attention of other commenters about BBC bias through a recent BBC TV report from BBC Breakfast's Graham Satchell.

It was another of those reports, featuring attractive migrants cast amid glowing Swedish scenery and various pro-immigration voices, including a Swedish mayor. It also (very briefly) featured an opposing voice, introduced as being "hard-right".

Well, the Sweden Democrats (the party of the "hard-right" lady featured) are pretty hard-right (though much less than they used to be). However, it struck me that Graham didn't give us any political label for the featured mayor. I had to Google her to find which party she represents (the centre-left Social Democrats).

'Bias by labelling' is a common bugbear of those concerned about media bias. This was surely a case of it, wasn't it?

You may also remember Graham Satchell from his reporting of the Rotherham abuse scandal. I certainly remember one report (which I've just found again) where the Muslim angle was only mentioned in connection with fears of a backlash - an absolute BBC classic of its kind.

So far, so typical of the BBC in this smorgasbord. However, sometimes something unexpected happens....

....such as a BBC reporter expressing the view that it's a very good thing that the UK isn't part of the EU's Schengen Agreement on the free movement of people.

That shocker came on Monday's The World at One and emerged from the mouth of the BBC's security correspondent Frank Gardner (about 27:35 in):

I think that one of the problems here is that in the Schengen Area - which, thank God, Britain is not a member of - but in Schengen you can pass across border with no checks in theory...

And if you think that's weird, please try getting your head around Jon Donnison posting a piece from a libertarian perspective, denouncing the nanny state in Australia. Yes he grounds his piece in the opinions of the only Ozzie libertarian MP, but (as is his way) JD doesn't disguise where his own sympathies lie - and they aren't where I expected them to lie:

And for me personally, I have to say Australia is without doubt one of the most rule obsessed and bureaucratic places I have ever lived.