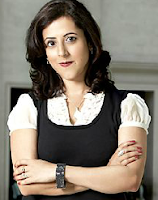 Is it time to change the name of Radio 4's Any Answers? Shouldn't it be renamed 'Anita Anand' and promptly shipped off to BBC Radio 5 Live as a phone-in show?

Yesterday's Any Answers? was given over to the migrant crisis and, as ever, the voice (and reactions) of Anita Anand completely dominated proceedings.

Just to recycle something I wrote earlier:

I find Any Answers a weird programme to listen to because most of my focus is unstoppably drawn to Anita Anand - and specifically to how she is reacting to each caller.

I actually find Any Answers quite a tense listen at times as a result, especially if Anita strongly disapproves of something the caller is saying.

And it's never hard to tell if she strongly disapproves of what the caller is saying.

The first sign is usually an uneasy noise of some description (a seemingly infinite variety of sceptical single words, long or short intakes of breath, 'ers', 'ohs' and 'ooohs', etc, delivered with all the insistence of a panicky blackbird, usually followed by a swift interruption (often the first of many)...

...and, oh yes, that doubting and somewhat moralistic tone of voice she effortlessly slips into when someone makes too 'controversial' a statement (for her tastes)...

...and then the challenges (putting the 'correct' BBC Radio 4 line of thinking), and - occasionally - the closing-off comments that distance her yet further from what the caller said...

Well, this week's edition was an especially tense listen and saw "the full 'Anita Anand Disapproval Treatment'" being meted out to several callers who didn't want the migrants brought en masse into the UK and the EU.

Those who did want them all to be allowed it got considerably less intense grillings - which I'd say is evidence of bias on Anita's part.

(The only time she sharply turned on one of them was when she thought she heard the lady say that only Christians should be brought in. When the lady clarified that to Anita's satisfaction, Anita let her proceed).

Lord knows why some of these people put themselves through it!

The first caller, Michael, didn't just have Anita moralistically yapping at him throughout his entire contribution, trying to undercut everything he was saying. He then had to face her setting subsequent callers against him - the first of them instantly denounced him as "xenophobic".

Some later callers (expressing similar views to Michael) fared little better - especially the man I know think of as 'the Russian steppes guy', thanks to Anita Anand trying to trip him up (and embarrass him) over his mention of 'the Russian steppes'.

Instead of being a space in the Radio 4 schedule where listeners get to hear the public answering the same questions as the Any Questions panel, we now get Anita Anand conducting something of a show trial against those who express views inimical to hers/the BBC's line.

Yes, I know the term "show trial" is somewhat hyperbolic, but it really wasn't a pleasant listen. Or an impartial piece of broadcasting for that matter.


P.S. The programme's intended angle can be read on its website - though Anita Anand didn't actually pursue it, concentrating instead on the suffering of the migrants and what we ought to be doing to help them: 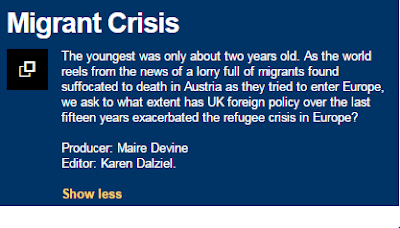 One caller with a Muslim name did bring UK foreign policy up and Anita closed his call by echoing his point ("So foreign intervention has earned you the obligation to help. Mohammed, thank you".)

Incidentally, a second chap with a Muslim name then came on to say, from personal experience, that large numbers of young man from a very peaceful area of Pakistan he knows are coming over here for an easier life and to send money back home, and that most they certainly aren't refugees. Even though I could hear most of what he said pretty clearly, the line wasn't perfect and Anita pretty swiftly said, "Arshad, I'm sorry, your line is breaking up but I think we got the gist of what you say".
Posted by Craig at 10:01