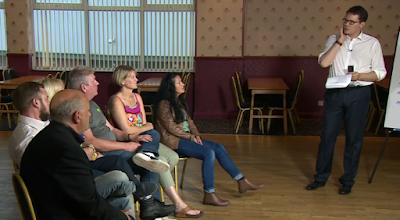 Last night's Newsnight was yet another Labour leadership special.

This one was based around a couple of focus groups, gathered by one of the BBC's pollsters-of-choice - Ipsos MORI's Ben Page.

Both groups consisted of former Labour voters from a couple of marginal constituencies (both of which went to the Conservatives in the general election). Some hadn't voted Labour since the Blair years, and most expressed warm views about Tony Blair.

Neither group seemed overly impressed by any of the candidates to begin with, though Yvette Cooper eventually won them round. Alongside Andy Burnham, she was judged the best of a bad bunch. Liz Kendall, in contrast, was universally trashed and Jeremy Corbyn dismissed or mocked. None of them could see Jeremy Corbyn as prime minister and none would vote Labour because of him.

If you know anything about Twitter, you will probably be able to guess what happened next: Hordes of self-reinforcing left-wingers leapt onto Twitter's echo chamber to (a) insult the people in the focus groups and (b) denounce 'BBC bias'.

Some of the wilder ones accused the BBC (including presenter James O'Brien!) of being Tories pushing a Tory agenda. Others said the BBC was intentionally pushing 'the establishment candidate' Yvette Cooper. The conspiratorially-minded even asserted that the BBC was actively conspiring with the Labour Party establishment to trash Jeremy Corbyn.

One popular gripe was that the Newsnight focus groups were unrepresentative (ironically, given that Twitter's self-generated "focus groups" are surely about the most unrepresentative 'selectorate' imaginable), consisting of "stupid" former Labour voters, "Tories" and Blair fans.

What these leftist Twitterers surely missed was that these people were deliberately chosen to represent the sort of people who voted in large numbers for Tony Blair but then turned away from the Labour Party over the course of the 2000s, many swinging back to the Conservatives (thus allowing the Conservatives to win those two seats back). (The question was: Would any of the present Labour leadership candidates win then back? The answer was: Probably not - and certainly not Corbyn.)

A related gripe was that some of the focus group members didn't know the names of the Labour candidates and, thus, were unrepresentative "morons".

As anyone who watches Politics rounds on BBC One's Pointless will know, however, most people wouldn't know their Jeremy Hunt from their Tristram Hunt. Most voters aren't party political animals. Any self-respecting pollster would have to ensure that such voters were represented in such focus groups.

The clips of Liz Kendall could hardly have been less helpful to her. Those selected for Jeremy Corbyn also seemed unhelpful, showing him as being nothing but negative. The Andy Burnham clips were reasonably OK (from his point of view), while the selection of Yvette Cooper clips could hardly have been more helpful to her, making her seem passionate and compassionate. (If a golden aura had suddenly appeared on screen around her I wouldn't have been surprised!)

The strange thing is though that when you step away from the detail and look at the whole picture, the whole thing could very easily seem like an establishment stitch-up - Jeremy Corbyn getting the full Nigel Farage treatment, as it were.