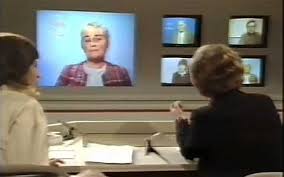 BBC Radio 4 broadcast a programme last night called Britain in a Box. It was presented by former BBC head of light entertainment Paul Jackson and looked back at the history of BBC One's Nationwide.

The closing section focused on one of the BBC's most famous/infamous moments (one of which the BBC seems to be especially proud): the encounter between teacher Diana Gould and then-PM Margaret Thatcher on Nationwide in May 1983 (during the election).

As you'll doubtless recall, this feisty encounter delighted many on the Left at the time, as Mrs Gould was seen to be confronting Mrs Thatcher over one of the Left's own causes célèbres: the sinking of the Belgrano during the Falklands Conflict.

One of the exchanges ran as follows:

Mrs Thatcher: “One day, all of the facts, in about 30 years time, will be published.”
Mrs Gould: “That is not good enough, Mrs Thatcher. We need ... ”
Mrs Thatcher: “Would you please let me answer? I lived with the responsibility for a very long time ...

And, "about 30 years time" after that interview, lo and behold!, it now seems clear (just as Mrs Thatcher said at the time) that Mrs Gould was not necessarily correct and that the Iron Lady wasn't necessarily wrong...

...nor that the Iron Lady was necessarily wrong to complain to Mrs Gould:

"I think it could only be in Britain that a Prime Minister was accused of sinking an enemy ship that was a danger to our Navy when my main motive was to protect the boys in our Navy. That was my main motive and I'm very proud of it.”

It appears after all, according the latest evidence, that the Belgrano, contrary to Mrs Gould's assertions, was heading into the exclusion zone after all and - as many of you may be aware (though it certainly wasn't brought out by this BBC programme) - senior Argentinian military figures have subsequently conceded that the sinking was a legitimate act of war.

And yet, 32 years on, on Britain in a Box on BBC Radio 4 (seemingly blithely ignorant of any of that), here was former Nationwide presenter Sue Lawley still persisting (with no questions asked) in pushing the old BBC agenda, and boldly asserting:

I would go as far as to say, possibly Mrs Gould knew even more about the detail of the sinking of the Belgrano than Mrs Thatcher did because she'd had a nephew in the South Atlantic and she'd been following it very carefully...

Ah, that's the logical fallacy known to philosophers as 'The Argument from [a Nephew's] Authority'! Mrs Gould could, of course (as she seems to have been) just plain wrong - despite her having a nephew.

Sue Lawley then proceeded to say:

I don't actually think that Mrs Thatcher thought it quite as significant a moment as it actually was...

Well, maybe Mrs Thatcher's initial instinct was completely correct in that respect - at least as far as the vast bulk of the British public was concerned (as opposed to the BBC and parts of the Left).

Maybe Sue (the other Sue) was wrong then and continues to be wrong now. And maybe this 2015 BBC programme ought to have aired the possibility of that being the case.

Anyhow, let's give Sue (the other Sue) her chance to tell her Mr and Mrs Thatcher anecdote at length...

...dripping as it clearly is with bien pensant disdain for the Thatchers and [much as I've always been inclined to like Sue Lawley] surely just as clearly revealing the BBC mindset in full, biased flow...:

I don't actually think that Mrs Thatcher thought it quite as significant a moment as it actually was because we were still talking, going down in the lift.

And then we entered the hospitality room (so called) where Denis was waiting. And he was as black as thunder.

That's when she knew.

He took her up the corner and there was a huge amount of whispering went on. And he was, you know,  spitting tacks.

And she turned around and she came over to me and she said, {loudly} "How many people asked that question?"

She said, {loudly} "When people wrote in, how many people asked about the Falklands War? This is not an election issue."

I have to say at that point all of the Nationwide producers seemed to disappear. They all went in search of a glass of wine...or something. I don't know!...I was trying to offer Mrs Thatcher a glass of whisky, because I knew she was dismissing my whisky...

I just said, "Well, if you had, it seemed like a very interesting issue"...

{loudly} "How many people asked about the rates?", she said...because you remember the poll tax was ultimately after ...and she was always...

...and she said {loudly}, "Hoomph, Hoomph! Come along Denis". And they swept out of the room, with Bernard Ingham, the press secretary, behind him, rushing in her wake. But he was not allowed that evening in the ministerial car, as they swept out of the yard in Lime Grove. I think he was persona non grata because he has led his mistress into an ambush.

It wasn't an ambush. We just thought it was an interesting question.

Sue Lawley certainly can tell an anecdote, but even in her (highly personal) account, it doesn't seem as if Mrs Thatcher ever got a proper answer to her question, "When people wrote in, how many people asked about the Falklands War?" - other than that "it seemed like a very interesting issue" to the BBC team behind the programme.

That, obviously, doesn't actually answer her question at all. And arguing "it seemed like a very interesting issue" to us at the BBC is, surely, hardly a compelling dismissal of the charge of bias either, is it?

[All the "{loudly}s" in that transcript, just in case you didn't realise, were included to demonstrate how Sue Lawley raised her voice to impersonate Mrs Thatcher.]
Posted by Craig at 20:34