Why no one is asking 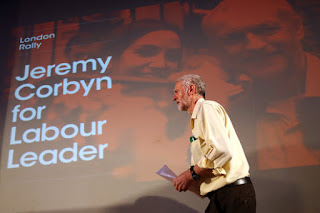 This piece in the Guardian (H/T Peter) by James Bloodworth asks the  question I addressed in my earlier post ‘Annihilation for the nation’.

“Why is no one asking about Jeremy Corbyn’s worrying connections?”

Bloodworth details the disturbing connections and affiliations Corbyn has fostered and which have been cited many times by almost everyone but the BBC, and he simply asks why the BBC and the BBC’s political fellow travellers are so unconcerned.

"What is most disturbing of all is that the BBC has always shied away from challenging Corbyn over his antisemitic affiliations. Whether they are ideologically pro or anti the prospect of a  Corbyn led Labour Party, they avoid dwelling on it because they regard it as irrelevant. Why stir up an unnecessary hornet’s nest, when no-one but the capitalist moguls of the Zionist lobby gives a toss?"

Me. T’other day. Not only did I ask the question, I also provided to answer.

"This is why they steer clear. It’s because these days there’s such a climate of Israel-hate in the world, that exposing its existence in a politician is neither here nor there. In fact the opposite is true. If there was no evidence of Israel-hate, it would be a hindrance to that politician’s electability. In terms of voter appeal, absence of antisemitism makes the heart grow fonder."

James Bloodworth’s article in the Guardian asked the question, and the below the line comments supplied the answer. Right down to the sneer at Harry’s Place  and the accusation that the writer was using underhand scaremongering tactics to smear ‘our man’.

The Guardian commentariat’s typical, near demented demonisation of Israel, which I mistakenly thought had migrated to the Telegraph, is alive and well.

"This article is very disturbing. The anti-corbyn coalition is clearly prepared to go to any lengths to try and stop Corbyn. It is now "guilt by association." This was the basis of the McCarthy red scare. Jeremy Corbyn, and all genuine socialists, are opposed to antisemitism in all its forms. This does not mean you do not try and negotiate for peace rather than being an advocate for endless war and slaughter. James Bloodworth degrades himself in making such attacks."

They don’t care about Corbyn’s tainted friendships, which, in any case, they insist are motivated by criticism of the Israeli government, and nothing to do with antisemitism. They applaud Corbyn’s thesis that no one should be excluded from the chance to negotiate, even those who have expressly declared their opposition to any form of negotiation as well as their refusal to compromise, ever, in any shape or form.

BBC employees have consistently and openly expressed hostility to Israel on Twitter. They must be confident that public expression of that particular partiality is acceptable amongst friends and colleagues, despite the BBC’s official impartiality obligations. Condemnation of Israel, doubts about its legitimacy and ignorance about its history run all the way through the BBC. No wonder none of their celebrity presenters is interested in exposing stuff that actually, they couldn’t care less about.
Posted by sue at 12:27