Several people have drawn my attention to an article by Stephen Daisley on (of all places)  STV news.
I was surprised to find it there because ever since Dunbartonshire  sparked off a wave of Scottish Israel-bashing by flying a Palestinian flag over their town hall I’d mentally written off Scotland and all who sail in her.

But look. Here’s a piece which stands out amongst the avalanches of seemingly ineffectual Corby-critiquing (reams and reams, all listing Corbyn’s dubious associations and friendships, about which apparently none of his fans could care less) It stands out because it tackles antisemitism within the political left. (!) Surely Corbynistas and others from the left might at least give it a second look. 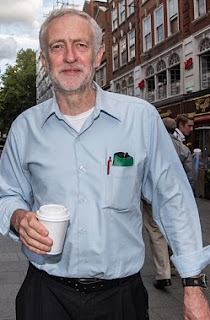 Analysis: Jeremy Corbyn is not an anti-Semite. It’s so much worse than that.

Like Corbyn’s other critics, Daisley begins by outlining many of the obvious examples of Corbyn’s misdemeanours.
Hamas and Hezbollah  - both considered terrorist organisations, both ideologically committed to obliterating Israel, both counted by Corbyn as friends, although hindsight has caused him to broaden the meaning of ‘friend‘ to include debating partners, and to add a mysteriously vague reference to “those with whom one profoundly disagrees”.
That, as well as pleading forgetfulness or ignorance, indicates a somewhat sloppy ‘That should cover it!’  attitude to these challenges.

“In truth, Corbyn says that Hamas and Hezbollah are “dedicated towards the good of the Palestinian people.” He says that they are dedicated to “bringing about long-term peace and social justice and political justice in the whole region.” He presents himself as a democratic supporter of a two-state solution but actually he supports and embraces those in Palestine who oppose peace with all the resources of their Iranian paymasters.”

Daisley mentions Raed Salah, of ‘Jews bake bread out of babies’ blood’ infamy, Jahjah and Eisen. He  hasn’t even got round  to Stephen Sizer and Ibrahim Hewett. 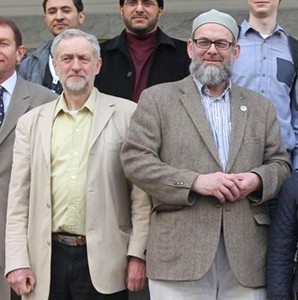 Dan Hodges has written a Corbyn themed piece in the Telegraph, "Jeremy Corbyn will be cheered by racists and terrorists" which ends with some powerful, original observations:

“I have been one of the Labour Party’s fiercest critics. But I never thought I’d see this day: the day Labour started to launder prejudice. The day its commitment to standing against all forms of bigotry was so casually slaughtered on the altar of political ideology and expediency.
Soon Jeremy Corbyn will become Labour leader. When he does, his supporters will cheer his victory. And Paul Eisen and Stephen Sizer and Raed Salah and Dyab Abou Jahjah will pause a while from Holocaust denial, and conspiracy theories and Blood Libel and dreams of dead British soldiers. And they will stand at the very top of their platforms. And they will cheer his victory too”

Jeremy Corbyn is not an anti-Semite. How I wish that he were. How much easier it would make things. We could chalk all this up to the prejudices of one man and we could avoid the raw, awkward conversation we’re about to have. Because this isn’t about Jeremy Corbyn; he’s just a symptom and a symbol. The Left, and not just the fringes, has an anti-Semitism problem.


Contrary to left-wing mythology, anti-Jewish prejudice has never been the exclusive preserve of aristocratic snobs or skinhead fantasists. "The Jew is the enemy of the human race," declared Proudhon. "One must send this race back to Asia or exterminate it." Bakunin labelled Jews "bloodsucking people" while Orwell, self-consciously anti-Semitic, even obsessed over the excessive number of Jews sheltering in London's Underground during World War II. (No matter what the Jews do to protect themselves, it's always disproportionate.) Marx, the grandson of a rabbi, essayed: ”Once society has succeeded in abolishing the empirical essence of Judaism – huckstering and its preconditions – the Jew will have become impossible”.

The contemporary Left, in most cases, would recognise these statements as irrational prejudice. But what if we substituted "Zionist" for "Jew", what would happen then? How many would object to "Zionists" being termed enemies of the human race? How many would be glad to see the "Zionist" become impossible? Anti-Zionism has removed much of the need for classical anti-Semitism by recycling the old superstitions as a political critique of the State of Israel. Why risk the ridicule that comes with quoting The Protocols of the Elders of Zion when you can cite The Israel Lobby and win eager nods from academics and commentators? Why deny the Holocaust when you can throw it back in the Jews' faces by fictionalising Gaza as a concentration camp? Why hurl rocks at a Jew in the street when you can hurl endless vexatious UN resolutions at Israel?

Every pathology of the anti-Semite can be visited upon the Jewish state in the flimsy guise of "anti-imperialism" or "human rights". It's all okay because it's "Zionism" you're against and that's not the same thing as Jews and what about Jews who are anti-Zionist. The hallmark of a bigot is seizing on dissonant voices within a minority community and using them to delegitimise the mainstream of that community. The exception becomes the rule and those whose only connection to Jewish communal life is signing onto letters to the Guardian denouncing Israel become more Jewish than everyone else.

I think that last paragraph needs a slight adjustment: “There is nothing anti-Semitic about criticising Benjamin Netanyahu, the Likud-led government, or the policies of the State of Israel.”
No, there isn’t, but only if you make allowances for the fact that (because of the people Jeremy Corbyn supports) Israelis are forced to conduct their affairs on a war footing. If you view the predicaments faced by the Israeli government as though you were in Islington, you are unlikely to come up with an non-antisemitic critique.


“The Left’s unhinged antipathy towards the State of Israel has let loose ugly sentiments wholly unmoored from such legitimate criticisms. Israel is execrated as uniquely malignant and its enemies held up as plucky freedom-fighters or victim-idols. Corbyn and his like sup with Hamas and Hezbollah, they say, because we must talk to all sides to resolve the conflict, even the extreme and unpleasant. It would never occur to them to invite representatives of the Jewish Defence League to Parliament or to count Baruch Marzel or Michael Ben-Ari as “friends””

I said something similar yesterday, complaining that the BBC failed to challenge Corbyn on that last point.
Daisley continues with a cornucopia of examples of  antisemitic anomalies, activities and utterances from other left-wing politicians (MP Paul Flynn Jenny Tonge) and the press, (The Independent, the Guardian).

He ends with a summary of the shaky antisemitic theories and solutions promoted by the Left, many of which are actively disseminated through platforms provided by the BBC:

“If only Israel allowed Hamas to build up its terror statelet in Gaza unimpeded, angry Muslim youths wouldn’t riot in the French banlieues. If only Jews were driven once again from Kfar Etzion and Giv'on HaHadasha — this time not in blood but in cushioned, air-conditioned UN buses — there would be no more 9/11s. If only Jews had no national homeland, returned to rootlessness and the kindness of Christian and Islamic hosts, synagogues would no longer be daubed in swastikas and Free Gazas.

As the left-wing Israeli novelist Amos Oz wrote: "When my father was a little boy in Poland, the streets of Europe were covered with graffiti, 'Jews, go back to Palestine', or sometimes worse: 'Dirty Yids, piss off to Palestine'. When my father revisited Europe fifty years later, the walls were covered with new graffiti, 'Jews, get out of Palestine’.”To be an anti-Zionist is to say the Jews alone have no national rights. The Left are committed internationalists; they just make an exception for every country in the world besides Israel. Today a European leftist is someone who sees "Jews, get out of Palestine" on a wall and tuts, before scoring out "Jews" and writing "Zionists" above it.

Jeremy Corbyn is not an anti-Semite and nor are most people on the Left. He is a petition-signer who never reads the small-print, a sincere man blinded as so many radicals are by hatred of the United States and Western power. But his ascendancy comes at a time of great upheaval and populist torrents battering the centre-left and centre-right. It is a storm in which the organisation of politics against the Jews could once again prove an anchoring force in Europe.

Corbyn has declared: "We all have a duty to oppose any kind of racism wherever it raises its head, in whatever form it raises its head." When he is elected Labour leader next month, Corbyn will become a pivotal figure on the international Left. He should use that office to mature his own politics and shepherd his comrades towards a civil and tolerant radicalism.

I thought I had plucked all the best bits out of Daisley’s piece, but you might not agree. To prove me wrong, do read the article in full.
Posted by sue at 15:27