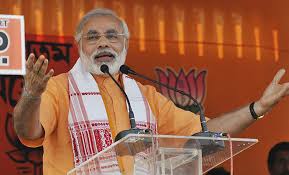 Monday's Today, shortly after that cataclysmic interview with Norman Smith, featured a report from India, overwhelmingly critical of the right-wing Modi government for its treatment of minorities, especially Muslims.

(The BBC reporter did speak to a BJP minister, for balance, but, in a shrill voice, ostentatiously interrupted him - presumably in order to show him to be 'a bad man').

Other blogs have also covered this (Biased BBC here and here), making some serious charges that India is being unfairly focused upon (with, I think, some justification) - though they failed to spot a complicating factor: that the report also included aggrieved Indian Christians complaining about the way things are going there.

Still, I heard that report as I drove to work early on Monday morning and thought, 'Typical BBC!'

I had, after all, predicted that the BBC would be overwhelmingly negative about the Modi government from the word go (he says, 'doing an Ian Katz').

And what's this I see appearing as the latest update on BBC News's feed on the 'My Blog list' sidebar as I write this post? 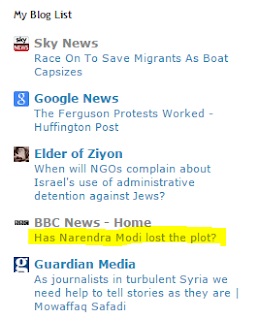