Giles and Aled go to Calais

The most controversial programme in the country today is....Songs of Praise.

The Sun broke the news last night that Aled Jones and "the full crew for Songs Of Praise" will be filming in the illegal migrant camp in Calais this weekend. They will also record worshippers in a makeshift Ethiopian Orthodox church there. The footage will then appear at a later date, not as a special but as part of the programme's (now-standard) magazine format.

Judging by the response to the Times and the Daily Mail articles on the story (and some of the Twitter reaction), a lot of people are seeing this as the BBC provocatively pushing its pro-immigration propaganda at us again: 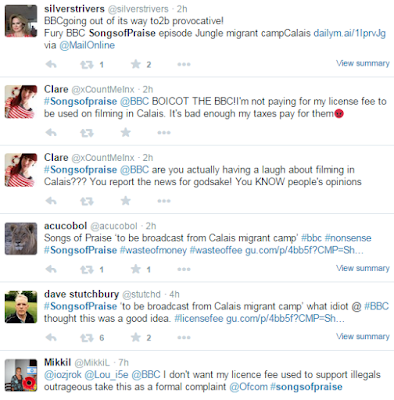 Others, of course, disagree: 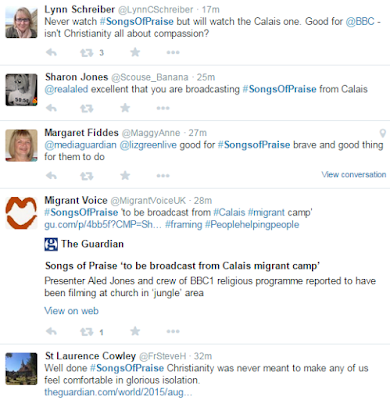 Conservative MP Andrew Rosindell, however, remains firmly among the unimpressed:

“This is an insensitive thing to do. We are facing a grave crisis. The BBC should be careful not to start looking as if they are making political points out of this.”

And he might very well be right in his worries about BBC political point-scoring....

Also appearing in the show will be Giles Fraser, who resigned from his job as Canon Chancellor of St Paul’s during the Occupy camp protest outside the cathedral.

Giles's presence will guarantee that a particular political point is made by the programme (and we can all guess in advance what that it will be).

If Songs of Praise fails to include a strong counterbalancing voice to Giles Fraser then it will, demonstrably, be biased - and will deserve all the damnation it gets.
Posted by Craig at 09:15