Which of the following reports (one from Sky, one from the BBC) do you find more informative? 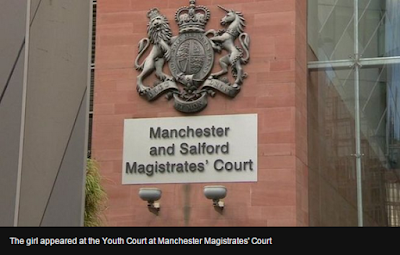 A teenage girl has pleaded guilty to two terror offences including possessing "recipes for explosives" and a bomb-making guide.

The 16-year-old, from Manchester, admitted the charges at the city's Magistrates' Court.

She was arrested in April following an investigation by the North West Counter Terrorism Unit.

The inquiry also led to the arrest of a boy, 14, who admitted involvement in a plot to attack police in Australia.

The court heard that phone data retrieved by police showed the pair exchanged more than 2,000 WhatsApp messages a day before being arrested.

No evidence was found that the girl was aware or played any part in the Anzac Day plot or any plan to harm others or incite terrorism in the UK or elsewhere, the court was told.

The girl, who cannot be named, admitted two counts of possessing a document containing information of a kind likely to be of use to a person preparing or committing an act of terrorism.

She used her school's IT system to search for information on Jihadi John, the so-called Islamic State (IS) group and images of Michael Adebolajo, who killed Fusilier Lee Rigby in Woolwich in 2013.

Analysis of her mobile phone found instructions for producing a timed circuit, a document about DIY bomb-making and the Anarchist Cookbook 2000.

The girl also had images of guns, knives and grenades.

Photos of a dead child and an execution were also recovered, the court heard.

The judge warned her that his sentencing options would include "immediate custody".

She was bailed until sentencing on 15 October.

Her bail conditions include ban on travel outside England and Wales, and on applying for travel documents.


Schoolgirl, 16, Admits Two Terror Offences
The teen had bomb-making instructions and an image of a child with the words: "I will be the one who slaughters you o kuffar." 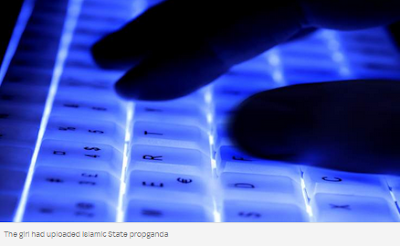 A schoolgirl has admitted terror charges after bomb-making recipes were found on her phone - along with pictures of dead children, executions and Islamic State propaganda.

The 16-year-old pleaded guilty to two terror charges when she appeared at Manchester's main youth court.

The court heard the girl used her school IT system to source information on 'Jihadi John' and images of Michael Adebolajo, Lee Rigby's killer.

She also had images of a dead child, IS executions, guns and knives and jihadi terror 'heroes', including Abu Bakr al-Baghdadi.

Wearing a headscarf and striped cardigan, she was excused from sitting in the dock.

Instead she sat on a bench in front of the judge, flanked by her mother, an uncle and her solicitor.

The girl spoke only to confirm her name and age and she pleaded guilty to two offences under section 58 of the Terrorism Act 2000.

She was granted bail by Judge Khalid Qureshi, who agreed to adjust her bail condition of reporting to police to allow her to attend college.

The girl's bail conditions include a 9pm to 7am curfew, reporting to police three times a week.

There is also a ban on applying for travel documents or a passport, and a ban on travelling outside England and Wales.

Judge Qureshi warned her that because of the law, his sentencing options would include immediate custody.

He added: "The youth offending team will want to interview you and your family.

"I will be asking you some questions directly about your conduct, your behaviour, why you think it has happened. I need to try to understand why this happened."

The girl was held by police in April following an investigation by the North West Counter-Terrorism Unit.

She told police that a chemical recipe in her sketch pad was in response to a Blue Peter programme on fireworks.

Analysis of her phone found instructions for producing a timed circuit, a document about DIY bomb-making and the Anarchist Cookbook 2000.

The girl also had publications by terror group Islamic State and images of guns, knives and grenades.

Images of IS flags and quotes including "I love that I should be killed in the way of Allah" and "Only Jihad No Democracy" were also found.

Photos of a dead child, an execution, and people about to be beheaded were recovered.

Another image of a female child carried the words: "I will be the one who slaughters you o kuffar, I will be a mujahid."

The girl was arrested at the same time as a 14-year-old boy.

He pleaded guilty last month to encouraging attacks on police officers during an Anzac Day parade in Australia.

Phone data retrieved by police showed the pair exchanged more than 2,000 WhatsApp messages a day before they were arrested.

But no evidence was found that she was aware or played any part in the Anzac Day plot.

The 14-year-old boy sent thousands of instant messages to Australian Sevdet Besim, who shared his admiration for the IS terror group.

The boy faces sentencing at Manchester Crown Court on 1 October.

He is being held in a youth detention centre in northwest England.

Among the messages the boy sent to Besim, 18, was one which said: "Suggest you break into someone's house and get your first taste of beheading."

Besim, who is awaiting trial in Australia, replied that that seemed "a little risky".


I can do no more than quote the commenter at Biased BBC who first spotted this contrast: