Potpourri for a Wednesday night

Family matters (of the most pleasant variety) are almost entirely keeping me away from blogging at the moment (sorry!), and will continue to do so for a while yet...

...but I've got a little bit of spare time tonight to spew out a few thoughts about what little I've read, seen and heard of the BBC in recent days (and a thousand apologies for the stomach-turning choice of imagery there)... 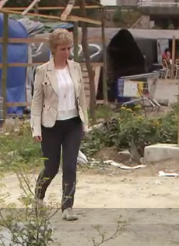 I did hear a little bit of the BBC's 'migrants in Calais' coverage over the weekend in advance of that controversial ('as they say at the BBC') Songs of Praise.

I heard, for example, a paper reviewer on Radio 4's Broadcasting House stick up for Songs of Praise and Labour peer Admiral Lord West (typically) strike a more balanced note.

(I like Admiral Lord West, but as I've said before: How, in the name of Lord Hall (PBUH), can Lord West be a Labour peer?)

No one, of course, railed against Songs of Praise on BH though.

Then I heard The World This Weekend with James Robbins, featuring a report stressing the need for 'compassion' towards the Europe-headed migrants followed by an interview with a lady refugee from Nazi Germany who was absolutely outraged at our unwillingness to take in the latest migrants en masse.

That certainly wasn't balanced. All the 'non-BBC' voices on TWTW sang from the same hymn sheet: all calling for 'compassion' towards the migrant waves; all wanting us to keep happily allowing those waves to keep crashing on our crowded shores.

That said, James Robbins asked the refugee lady a couple of 'impartial questions' about how people in the UK might feel about lots of migrants entering the country...

...but, that said (yet again), he mostly stuck to 'inviting' her to denounce the UK government (and politicians in general) over their 'anti-immigration' policies and language (raising "swarm" along the way).

So that still clearly wasn't balanced.

What with that and all the other BBC reports I'd heard, seen and read in the past few weeks, I was feeling - by Sunday evening - thoroughly miffed-off with the BBC.

The relentlessness of the BBC, advancing the migrants' cause at very point (as I saw it), was, therefore, truly wearing me down.

And then came that Songs of Praise...

That certainly was biased - and only added to my feeling that the BBC was trying to wear me down.

Despite Sally Magnusson's questions (see my earlier post), it projected a message of 'compassion' towards what Songs of Praise vox pop Giles Fraser (left-wing, pro-Occupy vicar) called his 'brothers and sisters' in that illegal Calais camp.

Of course many on social media (many gladly proclaiming themselves atheists) claimed (approvingly) that its bias was entirely Christian in origin, pace the great English poet George Herbert:

Having been tenant long to a rich lord,
Not thriving, I resolvèd to be bold,
And make a suit unto him, to afford
A new small-rented lease, and cancel th’ old.

In heaven at his manor I him sought;
They told me there that he was lately gone
About some land, which he had dearly bought
Long since on earth, to take possessiòn.

I straight returned, and knowing his great birth,
Sought him accordingly in great resorts;
In cities, theaters, gardens, parks, and courts;
At length I heard a ragged noise and mirth

Of thieves and murderers; there I him espied,
Who straight, Your suit is granted, said, and died.

But the presence of Giles Fraser and the inclusion of no one but (Christian) migrants and their English and French supporters (some of whom challenged the anti-migrant sentiments of many/most Brits) unquestionably, to my mind, settled the issue of BBC bias here.

This was biased BBC broadcasting. We were being preached to: Let the illegal immigrants in, sayeth the Lord Your BBC.

However, one of our earliest supporters here at ITBB, Damian Thompson (as some of your pointed out - and thank you), also gave the BBC a thoroughgoing slamming over this Songs of Praise (at the Daily Mail).

As ever, I agree with most of what Damian wrote (and recommend that you read what he said), but I'm far too fussy not to note that where Damian wrote...

Sorry to sound cynical, but the script glossed over one rather inconvenient but unavoidable fact about the camp: it is overwhelmingly Muslim.


In fairness to presenter Sally Magnusson, she did mention that the camp (despite the programme's focus on the Christians there) was mostly Muslim.

...and, re-checking the programme, it turns out that I was right about that. One of the first things Sally said (3:57 in) was:


The majority of people in the camp are Muslims.

Damian, as is the way with 'eye witnesses' reviewers, must have missed Sally's comments there.

Still, most of his points stand, and the process of erosion continued.

It's Wednesday evening, and much of that already seems like last week's news. So what next?

You're taking about a radical agenda to attract people, but you lost a lot of your supporters to the Conservatives back on May 7th, and so you lost the centre ground. You also lost a lot of long-Labour voters to UKIP. So you lost a lost of people to the far-right-wing of British politics.

Some Ukippers on Twitter, naturally, erupted at being so casually traduced. Matthew apologised on Twitter in response, deploying that 'I was merely being clumsy' excuse. (Yeah, right.)

And that seems to be that, bar all the fruitless complaints to the BBC. (No apologies on Today itself, naturally, just on Twitter, it appears).

Matthew said what he thinks about UKIP, in tandem with what he report about, say, immigration [and other matters], and the BBC spins on regardless, like a (laws-of-physics-defying) perpetual motion machine of bias.

Matthew Price seems to me to be one of those 'BBC gifts that keeps on giving'.

As BBC bias bloggers, parts of us, cynically, might very well feel glad that he's a gift that keeps on giving; but most of our parts would wish he wasn't (like, by repute, policemen regarding criminals).

So far, so not-so-much-of-a-potpourri...so here's a sudden flavour of something new:

Sheila, worrying about big business, pollution, etc, was inspired by equality-loving Susan George to get into 'food journalism' - and, as a consequence, BBC Radio 4 has been savouring (and indulging) her leftist lip-licking longings for food-related 'issues' ever since, it seems.

This sounded like #OccupytheFoodProgramme from start to finish. (Only on BBC Radio 4?)

Though Tom Holland's abridgement of Thucydides' History of the Peloponnesian War didn't and is still going swimmingly. His presentation of Pericles's funeral oration certainly stirred my innards. (Or was that the result of a curry?)

Those who complained to Feedback about Radio 4 daring to broadcast a one-off, sceptical piece about global warming from Quentin Letts will (possibly) have been relieved to hear 'business as usual' resumed courtesy of Stephen Fry (who famously knows everything about everything).

This week's Fry's English Delight tacked the issue of the British weather/climate, and the man who knows everything about everything about everything, Stephen Fry, was resolute on the point that UKIP spokesmen (repeatedly name-checked) are simply wrong about it:  UKIP and King Charles II are mistaken in their belief that God uses the weather to punish us....but we are responsible for long-term climate change.

If Stephen Fry, the man who knows everything about everything, is certainly about it on BBC Radio 4, who am I to be sceptical?

And, as we all keep being told, Stephen is omniscient - hence the wisdom of his jovial quoting of this limerick on QI immediately before the Savile scandal broke:


There was a young chaplain from King's / Who talked about God and such things / But his real desire / Was a boy in the choir / With a bottom like jelly on springs.

And that's that for the time being. Don't have nightmares.
Posted by Craig at 22:44