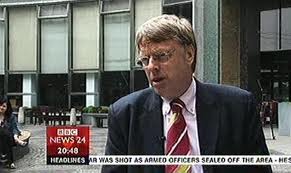 During fraught negotiations with the government over the licence fee, Lord Hall stated that the BBC would overshadow the Budget by publicly announcing the closure of BBC Two, BBC Four and local radio stations on either the day of the Budget or the day after the Budget.

Apparently, this resulted in a partial climbdown by the government, which then agreed to that series of "mitigations", including the potential of unfreezing the licence fee in line with the consumer price index.

Ray Snoddy isn't neutral on this, of course. He tells his story from a pro-BBC standpoint - and he certainly isn't a fan of John Whittingdale:

Patten may be a former chairman of the BBC Trust but he has been a Tory Cabinet minister and Conservative grandee a long time before that.

As a political put-down, it's up there with Denis Healey likening being attacked by Geoffrey Howe to being savaged by a dead sheep.

Lord Patten is right. And anyone who thinks anything valuable is at stake here on the future of the BBC should actively oppose the views of the teenage ideologue who most unfortunately, and much to his own surprise, has become Culture Secretary and therefore in a position to mindlessly damage an important British institution.