I woke up in the middle of the night and switched on the radio, just in time to catch a familiar voice saying “Suha Arafat”. It was, of course Zeinab Badawi, and I was wondering if this was another case of deja vu all over again; was I hearing the same episode of HardTalk that I’d blogged a while ago? Was it a figment of my imagination, or was it one of those dreams that are so close to reality that you’re wondering, in the dream, if it’s really a dream?
It was “another chance to hear” Suha and Zeinab, for no apparent reason other than, perhaps, to reignite the vexing question of Yassir’s assassination.

The audio version gives quite a different impression from the full-on technicolor version. No portrait of Yasser leering down from his easel to distract one - no time to ponder over Suha’s flawless make up (has she got a lady-in-waiting or does she do it herself?)

There’s just the conversation. No frills. Because I missed the start of the introduction I wasn’t quite sure if I was hearing an updated version, or whether this was an unadulterated repeat of the January interview. 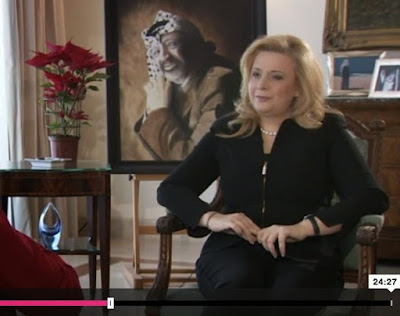 Suha was still convinced that old Yasser had ingested a dose of polonium in his frugal lunch -  just a little fish or chicken don’t you know -  because he was in fine fettle up to that fatal day. “My husband  was a fitness fanatic”, she said - good diet, abstemious, and the picture of health. We’ll have to take her word for it. He didn’t have aids after all.
Suha was insistent that someone - it must have been a traitorous Palestinian - had slipped the poison into his healthy lunch on behalf of the Israelis.

I was certain I’d heard that the poisoning theory had been definitively debunked by the French, Swiss and Russian investigators, but at the time of the interview, Suha hadn’t received those disappointing results, and she wouldn’t have liked them very much when she did receive them.
She’ll be appealing the findings. I don’t know if this is ongoing.

Now that I was able to properly listen, I realised that Suha was saying that old Yasser, the father of the Palestinians -  specifically the father of every single Palestinian child - wanted to establish a secular state.  Confusingly, he had made Suha convert from Christianity to Islam when they were married, secular old rogue that he was.

The only aspect of religiosity that concerned her  greatly was the unthinkable prospect of Jews being allowed to pray at the Temple Mount. She thought the very idea was beyond the pale. She got so worked up at the whole idea of Jews praying at the Temple Mount that Zeinab had to calm her down,. ”The Israeli government assures us that it’s not going to happen.” said Zeinab in a calm voice.

The bit about the money was as dramatic as ever. “Where is it?” asked Zeinab. “Where are Yasser’s millions?” I remembered the gestures with which Zeinab accompanied that question, looking round the room exaggeratedly, as if for a giant safe or a mound of ingots.

I wonder why the BBC World Service thought it was a good idea to resurrect this peculiar interview, specially since with hindsight the poisoning claim looks so ‘conspiracy theory’.