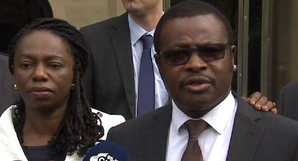 This is seriously getting out of hand...

One of the top news stories of the day is the conviction of a 14-year old schoolboy for stabbing a black supply teacher, Vincent Uzomah, in what everyone agrees was a racist attack.

Speaking outside court, Mr Uzomah said: "As a Christian, I have forgiven this boy who has inflicted this trauma and pain on to me and my family.

"It was, however, important for the law to run its course and for a strong message to be sent out, especially to kids of similar tendencies, that violence is never acceptable.

"Our prayer for him is that he will make use of the opportunities and support that will be provided to him, to become a changed person who will make a positive contribution to society."

That is testament to the Christian spirit of Mr Uzomah.

As for the boy, other than him posting racist tweets about his attack (and various cretins 'liking' his boasts about it on Facebook), the BBC gave us no more information (I presumed, doubtless naively, for legal reasons).

Turn to Sky News's account, however, and you learn a lot more about the story - and about the boy.

You also learn what the judge thought was the reason for the attack - and something about the boy's background:

Judge Durham Hall accepted that the attack was racially motivated and that the boy - from a Pakistani background - could not handle being disciplined by a black man.

To say that the BBC News website only gave us half the story today would be an understatement.

Though it would be wrong to regress into hyperbole, this clearly is proof of the BBC censoring important parts of a news story, isn't it?

Can anyone deny that the BBC is significantly whitewashing this story?

Will anyone defend the BBC for behaving like this here (on the grounds of maintaining 'social cohesion' perhaps)?

I don't know about you though, but I think this is absolutely clear-cut evidence of BBC bias.

The BBC appears to be trying to pull the wool over its audience's eyes - and doing so for purely 'politically correct' (i.e. ideological) reasons.
Posted by Craig at 20:35