The world's most trusted news organisation?

You may of heard of the killings and stabbings in an Ikea store in Sweden yesterday. The BBC News website reported that story throughout the course of yesterday evening.

Their article about it, however, has now dropped off both the Home and World pages of the BBC website and can only be found on the Europe page (some way down the page), as if it's yesterday's news: 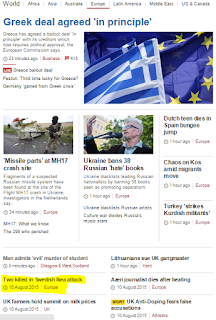 Considering that the BBC likes to be thought of as the world's most trusted news organisation, wouldn't you have expected the corporation to keep its huge number of readers informed of any significant developments in this story?

Yesterday nothing was known about the suspects. Today it has been revealed by Sweden's deputy prosecutor general that, “The two suspects are both from Eritrea. They have been living at an asylum centre”.

That was reported by the Guardian a few hours ago.

And a couple of hours before the Guardian came the Daily Mail with its headline, Two asylum seekers are arrested for stabbing to death mother and her son shopping for flatpack furniture in Swedish IKEA.

As of now, however, there's been complete silence about this development on the BBC news website.

So why isn't the BBC updating its website readers about this significant development in the story (unlike some other British news organisations)?

Is it for the same reason that BBC Online suppressed details of the (part-Bangladeshi/part-Pakistani) ethnicity of the schoolboy who stabbed Vincent Uzomah yesterday (unlike many other British news organisations)?

And is it for the same reason that the the BBC News website suppressed the story of Islamic State's threat to kill the Queen this coming weekend (unlike most other British news organisations)?

So what is the point of BBC News it only reports the news it thinks it's safe to report?
Posted by Craig at 15:47