“You know what their goal is. They can bring Israel to the point where white South Africa was 25 years ago. Y’know, the subject of a boycott, which gathers momentum and which isolates. Do you think they could succeed?” 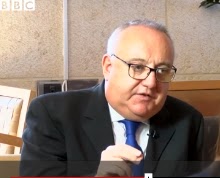 Does Kevin Connolly believe that life for Israeli Arabs in Israel is presently the same as for blacks in ‘white South Africa’ of 25 years ago, and does he imagine, if BDS were to “succeed” it would bring about some kind of justice? Perhaps he thinks Palestinians who live under Hamas and the PA should have voting rights in Israel, or that Israelis should be governed by Hamas or the PA?  We need clarification.

Most South Africans I’ve heard find this comparison not only offensive, but insultingly dismissive of the degree of the malignancy in a genuine apartheid system.

Giving a platform to BDS chief Michael Deas, perhaps in the name of ‘balance’, if that’s why this was aired, gives credence to a false moral equivalence. Deas seems quite stupid as well as, dare I say this -  racist.  On the BBC website it says:

“The international pro-Palestinian Boycott, Divestment and Sanction (BDS) movement has been using the same techniques as anti-apartheid campaigners who worked to bring down white minority rule in South Africa.”

In other words, does the BDS movement want to turn Israel into another Islamic state because they find the concept of a Jewish state in the region “racist”?
The irony of calling Israel racist is so outrageous that I can’t believe anyone takes BDS seriously. But they do!

Here’s the latest manifestation of BDS. It entails not just boycotting anything produced in settlements, nor merely boycotting anything produced in Israel proper, but vetoing performances by Jews - unless they sign an anti-Israel disclaimer.
You might have heard about this before. Douglas Murray points out why BDS is a racist concept, if anyone didn’t already realise it.
Spanish pro BDSers required a Jewish performer to sign an anti-Israel style declaration before performing at their a music festival. He wouldn’t so he couldn’t.

“For Matisyahu is not an Israeli -- he is an American. Yet after the intervention of the BDS protestors, the festival's director tried what he presumably thought was a perfectly reasonable request: Filippo Giunta asked Matisyahu to produce a "signed statement or video" stating "in a very clear way" that he supported the creation of a Palestinian state. This was made a precondition of performing. "If you sign these conditions, you can continue the performance," the festival's director told the artist.”

“... perhaps we could also initiate some other geostrategic questions that might be demanded of all other performers in the future”

“...Maybe the rest of the world should demand that all musicians from Spain sign a statement or make a video supporting Catalan independence if they are to be allowed to perform in public?

“....To my knowledge Turkish artists are nowhere in the world asked to condemn their country's illegal occupation of Northern Cyprus

“...........to demand such an action or statement from an artist as a prerequisite to perform would be not just outrageous, it would be regarded as surreal. Why then is the BDS campaign able to normalize such a demand, and for a festival to cancel a performance based on non-compliance with such grotesque demands?The answer is the fever of our time. For a while, only Israeli Jews were made pariahs among the nations because of an unresolved border dispute involving their country. Now it is Jews born anywhere else in the world who can be targeted in the same way. They are singling out Jews -- Jews and only Jews. And their singling out of Jews, wherever they are from, makes their racist motivation abundantly clear. If the Rototom Sunsplash festival wants to take part in this racist BDS fever then it is them -- and not Jews -- whom the world must make into global pariahs.

Michael Deas does not recognise the hatred for the Jew (‘Yahud’ ) within Palestinian society; he isn’t even aware that such a thing exists.
He only wants the right of return to Israel for seven million Palestinians, the descendants of the Arabs who were ‘ethnically cleansed’ in 1948 (and he demands they ‘tear down that wall’) It’s another of those faux reasonable “innocent face” pleas for justice.

Yasmin Alibhai Brown, one of the BBC’s speed-dial talking heads, is now defending Jeremy Corbyn with precisely the same faux reasonableness. There’s such a lot of projection going on in her painstakingly manipulative logic. She  is supposed to be evidencing a lack of racism in Corbyn and his associates, seemingly unaware that she’s using racist arguments and emotive turns of phrase in the attempt.
Surprisingly, for the Independent at least, the below the line commenters have seen through her argument.
Here are a couple of the responses:

"the forces of darkness", well that is some fine unemotional fact based journalism for you.
I wonder if she would be as keen to defend the man if he associated with, financed and called friends people who denied Idi Amin did anything untoward, and drew cartoons depicting Uganda's Indian population as bloodsucking, money grabbing exploiters of real Ugandans?  Doubt it somehow, but as usual she has special rules to apply when it comes to some people.

Mr. Corbyn calls Hamas and Hezbollah his friends and demonizes Israel. He ignores hate speech against Jews and actively supports those who spout it. And I've not heard a word from him against any other nation in the middle east... just the Jewish one.
Why is it the only thing this 'decent human being', this non-anti-Semite, cares about is Israel?
It is not the duty of every decent human being to 'criticise Israel' particularly when your criticism is solely intended to demonize the Jewish state and not make life better for the Palestinians (Otherwise you'd be 'criticising the PA and Hamas too) and once you do that Israeli injustices fade in to the background.”

Here’s an excerpt from Yasmin’s article, which goes under the nifty title :
“Fling mud if you must, but don’t call Jeremy Corbyn an anti-Semite” 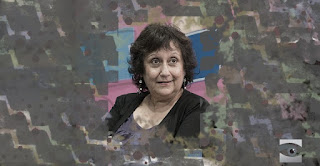 “So here is the new claim being put about assertively: those who want to destroy Jewry hide behind the Palestinian cause. They are right, up to a point. Veiled anti-Semitism is around us, and most of all on university campuses, where Palestine is a burning issue and convenient alibi. Attacks on Jewish Europeans are also rising.Just as pernicious is the way Zionists use the charge of anti-Semitism to block probes into Israel’s oppressive practices, its weaponry, and its influence in Western parliaments. Some public intellectuals and politicians – who should have some understanding of nuance – have become propagandists for Israel, be the country’s actions right or wrong. They use images of Nazism and excruciating memories to whip up fears of a new horror, an impending extermination of the plucky nation by its cruel colonial neighbours. I myself have been subjected to such intimidation and branded an anti-Semite over the years. More such muck will be thrown at me when this column appears.

*******
“I myself have been subjected to such intimidation and branded an anti-Semite over the years.”
Oh noes!


Pass the muck Ariadne, quite a lot of throwing is called for.
Posted by sue at 19:47