BBC Watch has blogged ‘walls’. We blogged them the other day as well.

The matter of fact way the BBC describes walls constructed by various countries to separate their citizens from undesirables or illegal migrants differs in tone from the suspicious manner they adopt when referring to the security barrier, often called the apartheid wall. They imply that Israel’s ‘excuse’ is disingenuous; not really for protecting Israelis from intruders with malicious intent, they imply, but for land-grabbing.

I’m only mentioning this again because yesterday the rev. Lucy Winkett delivered a ‘forgiveness‘ themed sermon on Thought for the Day.  She has a thing about walls.
I was wondering if I could truly forgive her for teaming up with the smarmy Stephen Sizer whose six month ban on anti-Israel internet activity must have expired by now.

Could I forgive Stephen Sizer for being a manipulating sanctimonious antisemite? I suppose that would be the Christian thing to do, taking the lead from Vincent Uzomah who forgave his assailant because he’d very likely been brought up with violence and that was all he knew. Lucy was full of admiration for Uzomah’s Christian attitude.

I could say, Stephen Sizer, you’ve been brought up with antisemitism, and that’s all you know, so I forgive you. But how do I know how he was brought up? Perhaps he was educated by the BBC, in which case one might be minded to forgive all the antisemitism that has arisen from the BBC’s legacy of one-half-of-the-story reporting. Forgive them for they know not what they do.

I hadn’t realised Sizer was the inspiration behind Bethlehem Unwrapped. I thought it was Lucy’s project, devised in conjunction with that other chap whose name escapes me.  I was wondering if a nice girl like Lucy would have been so hopelessly open to persuasion, since she was described in, dare I say ‘excessively’ glowing terms in this radio 4 profile, which was, admittedly, constructed before the offending ‘Wall” stunt. 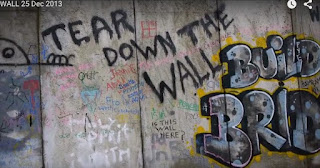 At the end of her sermon she said something like “in order to forgive, one must be able to forgive oneself” So Lucy, have you forgiven yourself for your politically inept, misguided collaboration with the antisemitic Palestinian lobby?
Posted by sue at 18:09