Jon Donnison and the "refugee" who makes the world's best coffee

For all of us who've been following the career of the BBC's reluctant Sydney correspondent Jon Donnison, his latest BBC report will come as no surprise at all: 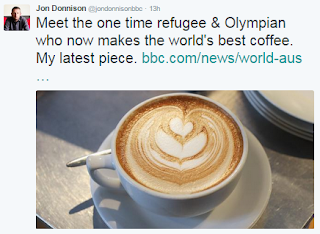 Nor will you be surprised, on viewing JD's report, that the "refugee" bringing such benefits to the benighted Ozzies is captioned as: "Born in Bosnia. Fled the Balkan Wars for Australia".

Are you (like me) detecting a not-so-hidden message here, given events in Calais?: Think of all the potential coffee-makers we could have if we let in these "refugees", "fleeing wars" around the globe, into our country?

What Jon Donnison wants us to take from his report seems pretty obvious from his tweet, doesn't it?

However, was (ethnic Serbian) Sasa Sestic really a "refugee" from the Bosnian War, as the BBC man implies?

From Googling around, it looks as if JD may have been exaggerating that part of Sasa's life-story:

Q: Tell us a bit about your background – where did you grow up, did you study and if so what did you study, and what were you doing before you became involved in the wonderful world of coffee?

A: I grew up in Bosnia, worlds apart from where I live today. Wanting to get away from my war-torn homeland, my brother, Dragan, and I decided to use the one skill we had in common to migrate to another country. Taking an enormous leap of faith, we applied to represent Australia at the Sydney Olympics in handball – and we won a berth on the team! Citizenship followed, and hence our move to Australia.

Now, that's not my idea of a proper "refugee". Nor is it really what legal types consider a "refugee" either, is it?:

The Definition of a Refugee

International legal protection of refugees centres on a person meeting the criteria for refugee status as laid down in the 1951 Refugee Convention. Under Article 1(A)2, the term “refugee” shall apply to any person who:

Jon Donnison seems to be seriously spinning his latest story here in order to make a pro-immigration point...

...and his tweeting is obviously tied to his actual reporting.
Posted by Craig at 19:34