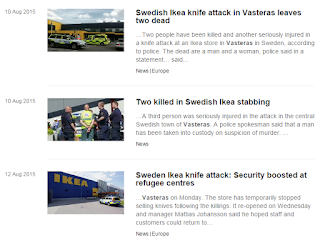 Following on from a post yesterday concerning the BBC's failure (in contrast to other news organisation) to update its website coverage of Monday's murderous attack on shoppers at an Ikea store in Sweden with the breaking news (yesterday) that the suspects are Eritrean asylum seekers...

Well, the BBC has now published an update (Wednesday, around 13.00) in which BBC website readers have at last been informed about the background of the suspects. The BBC's angle, however, concerns fears of a "backlash" from "dark forces": 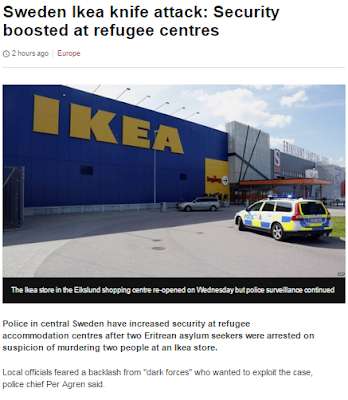 This reminds me of something I wrote on Sunday about another story the BBC was suppressing at the time:

It's entirely typical of the BBC to want to play down such a story though (and play it down to the point of not reporting it at all on its news website - though, knowing the BBC, it might appear later in the day if some helpful angle emerges to soften the story's impact).

That was a somewhat cynical thing to say, of course, but in the case of the Swedish story it does seem to have been borne out, doesn't it? "Some helpful angle" did "emerge to soften the story's impact" and only then did the BBC report something that other news organisations had been reporting yesterday.

Incidentally that other story - the one from Sunday that almost every other British media organisation reported regarding the ISIS threat to kill the Queen this weekend - well, the BBC also eventually published a website report mentioning that that too - yesterday, two days after everyone else and not very prominently: 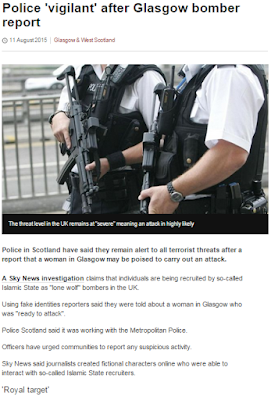 You will, perhaps, also notice that the BBC website team responsible for that article decided to spotlight one particular point (you might even call it a message): 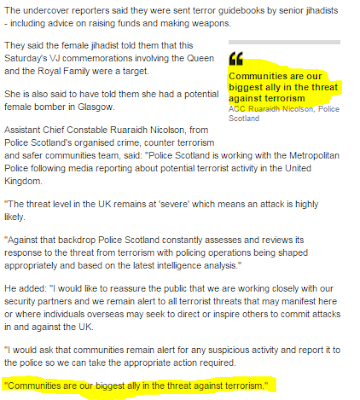 This kind of thing isn't exactly dispelling the impression that the BBC is engaged in far too much agenda-driven spinning at the moment, is it?
Posted by Craig at 15:37