Not content with broadcasting Songs of Praise from The Camp of the Saints in Calais, the BBC has also announced a docudrama about their hero Mark Duggan. The approach being taken can be judged with the following extract from the casting advert: “In this film we will try to find the man behind the gangster stereotype and understand the challenges he faced as a young black man from Tottenham’s Broadwater Farm Estate, an area which has lived in a state of semi-permanent siege since the murder of PC Keith Blakelock in 1985.”

See http://www.bbc.co.uk/news/entertainment-arts-33817829. Note the carefully chosen photo they have used.

Now, according to that link, the BBC responded to advanced criticism of this new Duggan-related thing by saying that they "would take a 360 degree point of view" (i.e. "telling the story from multiple perspectives and asking questions that remain surrounding Mark's death"), but....

....the BBC has serious form here in not reporting the story impartially (for evidence of which please see here)...

...and everything from the working title ('Lawful Killing') to the asking of "questions that remain" and the grievance-language of "lived in a state of semi-permanent siege" raises alarm bells that a special agenda might be at work here after all.

And, yes, of all the photos they could have chosen of a man officially found last year (by a jury) to have been lawfully killed by the police (and who, the court also decided, had been carrying a firearm close to the time of the fatal moment), was this.... 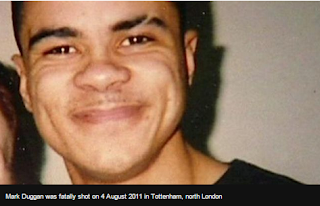 They could, of course, have used other, less viewer-friendly images, such as.... 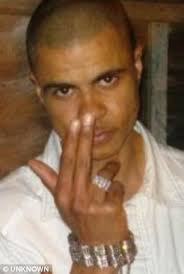 ...but that's doubtless part of their plan to show "the man behind the gangster stereotype".

Whether the programme takes a considerably-less-than-360-degrees view of events or pushes a particular provocative agenda only time will tell.

Maybe it will back up the jury's findings after all. Knowing the BBC though, I rather doubt it.
Posted by Craig at 08:24