It looks as if the BBC has got some serious questions to answer today. 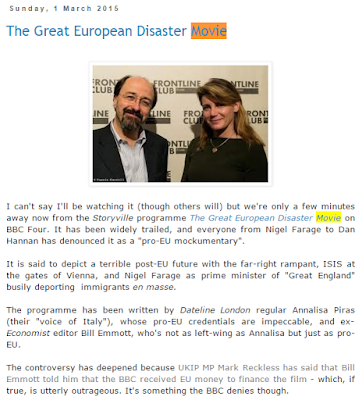 The incendiary claim that the BBC had received EU money to finance this pro-EU 'mockumentary' was strongly denied by the BBC at the time:

A BBC spokesman responded to the accusations over EU funding and bias saying:


"No EU money was used in the making of the programme being aired on the BBC. Impartiality is of paramount importance for the BBC.

This fictional programme reflects the author's vision. BBC editorial guidelines do not prevent the acquisition of independent programmes which approach subjects from a particular perspective."

And then, as is the way with such things, almost everyone forgot about it. Until now.

According to research into EU spending by the TaxPayers' Alliance, however, it now seems as if that BBC spokesman was talking out of his lying posterior and that the pro-EU 'mockumentary' was funded by the EU after all.

Here's the relevant bit from the TPA's press release:

Europe: Who Do You Think You Are?, a mockumentary set in 2060 originally planned to star Eddie Izzard as an archaeologist, given £71,000 (€96,991). Izzard was to narrate a "dystopian future" in which "the EU has disintegrated." The feature film - described as a "documentary" in the official description - was designed to argue "that despite the many flaws of the European Project, the case for togetherness remains overwhelming." This was shown in the UK on March 1st 2015 on BBC4 as The Great European Disaster Movie, starring Angus Deayton rather than Izzard.

How will the BBC try to wriggle out of this one?
Posted by Craig at 08:33