Jeremy Corbyn’s supporters were outraged at the audacity of Cathy Newman’s ambush  of their hero in some back alley t’other day.
It was filmed and widely disseminated on the internet.
Newman questioned him on his association with Hamas and Hezbollah and friendships with antisemitic individuals like Raed Salah, to which he protested  “they never said anything antisemitic in front of me”, and of infamous holocaust denier Paul Eisen “I didn’t know he was a holocaust denier.”
His main defence seemed to be that his mother stood alongside the Jewish people and the Irish people against the fascists in the notorious Cable Street demonstration.

As if those answers weren’t feeble enough, Cathy Newman’s questions were pretty feeble as well.
Let’s not forget that Channel Four is as censorious and condemnatory of Israel’s defensive activities as anyone. Jon Snow is probably more guilty of promulgating pro-Palestinian propaganda  than Corbyn.
However, apart from the actual holocaust deniers, most Israel-bashers will concede that the Jews suffered at the hands of Hitler; some of them even admit that Jews have suffered in a unique way. This does not translate into sympathy for Israel. Somehow, somewhere on the journey between universal sympathy for survivors of Belsen and Auschwitz and the establishment of the Jewish state in the historic homeland of the Jewish people, something went awry. Logic, history, facts, documentary evidence - all flew out the window.  Out with the philosemitism, in with the antisemitism.

Personally I feel that insincere challenges from the likes of Cathy Newman are futile because the bulk of Corbyn’s supporters couldn’t care less about his friendship with Salah, Sizer, Eisen, and now, another scandal, his association with a fellow named Dyab Abou Jahjaj.

The most damaging aspect of these revelations is that Corbyn seems to have forgotten his  friendship with this man altogether. Various investigators have come up with all sorts of evidence, which indicate that he’s a liar, or, if you prefer, economical with the actualité. In other words their hero is behaving in the manner of someone to whom the truth is irrelevant.

The Telegraph has joined in the fun. 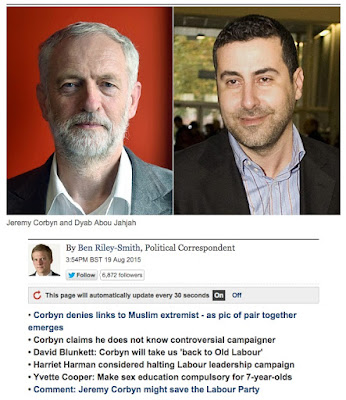 And so has the Daily Mail:

“As to my position towards Palestine, it is guided by anti-racism and decolonisation logic. The racists are the Zionists themselves.”

“Douglas Murray, of the human rights think tank the Henry Jackson Society tonight accused Mr Corbyn of being a ‘cheeerleader’ for Jahjah.He said: ‘Jahjah is a well-known thug on the Continent, particularly in Belgium and Holland’.‘Mr Corbyn hosted him in London in 2009 - long after his views because widely known. Indeed he was banned from entering the UK that year by the Home Secretary.‘But it’s not just the fact that he was receiving Jahjah – he was cheerleading for him. That is what makes this case so troubling.’”

The Jewish Chronicle posed some questions a few days ago, and it seems Corbyn has now attempted to answer them, through a spokesperson from his office.

Doesn’t matter. Doesn’t matter. Water off a duck’s back. Corbynistas will say it’s a smear campaign. They don’t care. Are they bovvered? No. They.  Ain’t.