The Corbyn phenomenon again. I wish I didn’t have to keep talking about this, but needs must.

No-one ever seems to agree about whether the BBC’s bias against Israel is because of  ignorance or malevolence, or a bit of both.

We might apply a similar question to Corbymaniacs. Why doesn’t Corbyn’s Islamophilia and his links with antisemites bother them? They must have heard of it, but do they understand the full implications of it? Is it that they do know and they do understand, but they just don’t care?  Or is it a bit of both?

A well respected journalist based in the south west - the arts editor of the Western Morning News, has written an article which I think typifies one important strand of pro Corbyn thought. He expresses his admiration for Corbyn without any mention of the words ‘antisemitism’, ‘holocaust denial’, or ‘friend’. I have no idea what he thinks about Corbyn’s “friends” but I would guess that he generally sympathises with the Palestinians, in the way most of the BBC-educated left do. Not all that interested, but if pressed, or at times when we’re all subjected to blanket media coverage of Gaza, they know which side they’re on.

Like Corbyn, his outlook is pure old school Labour interwoven with a smattering of knee-jerk anti-tory prejudice.
However, there are some valid points in there, and since I know this man is actually a friendly, agreeable guy, I thought I ought to pay him the courtesy of reading his piece ‘without prejudice.’

In the first section he sets out his family’s Labour background. “Labour is in my DNA”. Well, I get that. His parents are lefties. Jolly good. So were mine, but I’m not sure if they’d be now, if they were still around. I like to think they’d have moved on.

I understand completely his criticisms of New Labour, and his anger that the current leadership contenders and their ilk have dismissed Corbynistas as ‘extreme’. They are insulted because they see themselves as ‘originals’, the genuine socialists, the traditional left wing idealists. ‘How very dare these ‘tory-lite’ upstarts misrepresent us so!’ they say.

Corbyn and the hard left are the good guys, he believes; they alone support righteous causes, like a publicly funded NHS, re-nationalised utilities and railways and higher taxes imposed upon the greedy rich.

This nostalgic, retro way of thinking is not solely directed at Labour idealism circa 1945, but also encompasses a kind of Dickensian picture of the Tory.  Tiny Tim starves in the workhouse and the bankers gloat as their millions mount up at the expense of the downtrodden.

What they don’t acknowledge, blinded, I think, by resentment and inverted class prejudice, is that neither the current government nor the previous Labour government actually fits those long-gone stereotypes - the heartless, nasty, right-wing toffs versus the caring, egalitarian, noble, left-wing, workers.

The fact is we’ve had centre ground politics for some time and society’s inequalities and injustices exist, and thrive, no matter what. It is understandable that Corbyn and his followers don’t like the status quo and want to overturn it.

If Jeremy Corbyn could magic it all away by creating extra money and  fairy dust from thin air I might vote for him myself.

But there are numerous flaws in Corbyn’s politics. Anti-austerity? What is that? It necessarily implies that austerity is a choice, imposed by the haves to punish the have-nots, for spite. Abolishing tuition fees is the promise only the unelectable can afford to make; these fanciful ideas always fail.  The definition of Insanity: doing the same thing over and over again and expecting different results. (Albert Einstein.)

The railways are indeed a mess. The incompatibility between one company and the next causes endless complications. Utilities are a shambles as well. But public ownership? What about the inertia and the corruption?  There’s no easy answer to problems like inefficiency, lack of motivation, incompetence, which are part and parcel of anything that grows big and unmanageable. Nationalisation might be worth a try, but I bet the big bosses would be as fat as the fattest fat cats that presently run massive institutions, be they private or public, and the workers would be just as exploited.

Anyway, that’s not really my point. Here are the closing paragraphs from this pro-Corbyn journalist who neglects to mention the antisemitism factor altogether.

“Some argue that a Corbyn-led Labour Party is unelectable. I don’t personally believe that to be true. But even it were the case, would it really be any worse than what we already have? Is an unprincipled Opposition that votes for austerity and welfare cuts any worse than a Labour government that follows any old reactionary route simply in order to get re-elected?
Tony Blair once famously said: “Power without principle is barren, but principle without power is futile.”The crucial difference is that unlike the discredited former premier who pursued power at the expense of principle, I’d lay bets that Jeremy Corbyn – a man with “fire in his belly” according to my dad – will not sacrifice any of his principles on the road to Number 10.”

But what about those notable articles about Corbyn and antisemitism, which I can’t imagine people like our WMN journalist have missed.  There is the Stephen Daisley piece I highlighted the other day, and a new piece by Louise Mensch in the Jewish Chronicle. Not that someone like our Westcountry writer would likely come across it, and even if he did, I expect anything that comes from a Conservative would be automatically disregarded.
Mensch points out that Corbyn has not made any attempt to distance himself from or confront the rabid antisemitism that some of his followers have expressed, openly, on social media. Silence reigns, apart from a limp request for “no rudeness” 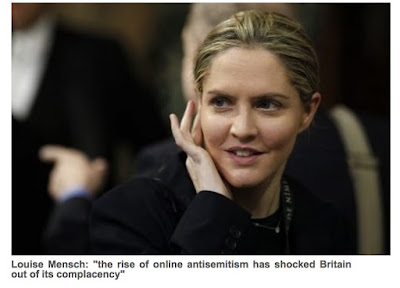 “The majority of Jeremy Corbyn’s supporters are not antisemites but hundreds, maybe even thousands, of them are. Antisemites form a significant minority of Corbynites and they are among the loudest online. Abuse and Jew-hatred is rife.

First you have the open loathers of Jews like Alison Chabloz, a performer at the Edinburgh Fringe who tweeted a quenelle then said that Jewish people brought pogroms on themselves. You have those who said Liz Kendall was “a servile zionist cow”. You have Fred Litten, who tweeted “Hitler was right and we were wrong”. You have the commenter on my blog reporting on Mr Corbyn’s meetings with antisemites who said that the Holocaust was fake but added, wistfully: “I wish there were six million less of them”.


Next, you have people who are antisemitic but do not know they are. Perhaps these are more worrying. “What, are you saying that all Jews, not just the business owning rich ones, hate Corbyn?’ one man asked me. “Nothing wrong with denying the Holocaust, history is written by the victors,” said another. “Zyklon B was used for delousing." Another, a Scottish nationalist who likes Mr Corbyn, replied to a tweet saying he had called for an inquiry into 'Jewish donors to the Conservative party' with 'About time!'. (In fact, Mr Corbyn had supported an inquiry into 'Zionist' donors to the Conservatives, but every name mentioned at the event when he endorsed this was Jewish.) The antisemites are drawn to Mr Corbyn like a moth to a flame. “The Nuremberg trials were for show,” said Matthew Lees. Susan John-Richards, a deselected Tory councillor in 2010, now supports him because of her antisemitism. “All Jews are intermarried anyway,” she says. “Jews and Zionists own the whole world.” She also believes in the blood libel and that “9/11 was an inside job”.


Respect Party suppporters of George Galloway have flocked to back Mr Corbyn. Adnan Sadiq, for example, condemned by the Corbyn campaign in the Sunday Times for his tweeting, worked for Mr Galloway in Bradford. Joanne Stowell, formerly a staunch Respect supporter, is now a huge Corbyn fan. “We’ve had the Holocaust rammed down our throat by by Zionists forever ensuring only Jewish suffering counts”, she said.

Another prominent social commenter whom our journalist must surely have come across is Owen Jones, who has written in the Guardian. “Antisemitism has no place on the left. It is time to confront it.”
This reminds me of Mehdi Hasan’s article in a similar vein. Two people who have  virtually made a career out of Israel-bashing have suddenly decided to distance themselves from accusations of racism.
Owen sets out a reasonable explanation of how antisemitism usually manifests itself, then, as one of Corbyn’s most high profile supporters, he “confronts it” - “it” being Corbyn’s antisemitic leanings, accusations thereof. He defends his hero in the way you’d expect.

“The Labour leadership frontrunner, Jeremy Corbyn, has been a long-term supporter of the Palestinian justice movement. He could not possibly have known the personal backgrounds of every individual who has joined him at the many rallies he has attended over the years. Some of these people were antisemitic. And while the vast majority of people involved in the movement are – like myself – driven by a passionate support for self-determination, there is a minority that indulges antisemitic tropes. These ideas have to be defeated.” 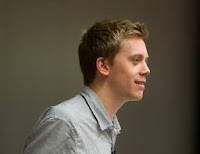 It’s all very well Corbyn saying that he finds antisemitism (and of course Islamophobia) deeply offensive, but that’s not nearly enough. He needs to acknowledge it and condemn it when he sees it, just like he says everyone should do.

Various left-wing Jews who support Corbyn have written to the press, saying  he has nothing to apologise for, but since his  associations and affiliations have drawn out such overtly antisemitic comments from a his supporters,  he surely does. He has got something to apologise for. Very much so.


Again, is it because he doesn’t really know what post-Hitler antisemitism is, or is it that he knows, but doesn’t care? And the same goes for those unreconstructed post-war Labour supporters who want to dismantle capitalism, like my friend from the Western Morning News. No-one likes admitting that they’re racists, but it’s high time they looked in the mirror and  'confronted' themselves.
Posted by sue at 18:00