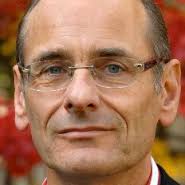 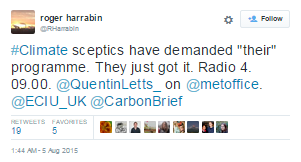 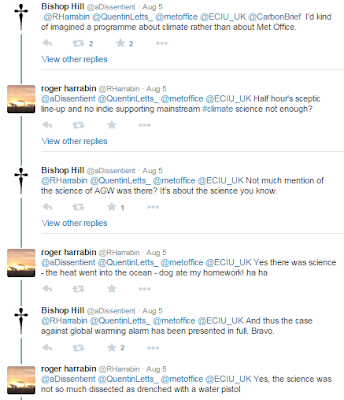 Damian Thompson notes the "entirely predictable outburst from The Guardian" - specifically from Roger Harrabin's former ally at the BBC, Richard Black, adding "that’s what you pay for when you buy The Guardian".

He then comes to the main point:

Harrabin, on the other hand, is paid by us – the licence payers. And he’s employed by the corporation that made What’s the Point of the Met Office? Yet, judging by his Twitter feed, his views are even more partisan than those of Black. When he’s not plugging a Guardian conspiracy theory involving US Republican sceptics and BP, he’s wringing his hands at the cut to wind subsidies or lamenting the lack of civil servants to enforce ‘smarter’ environmental laws. Also, he feels the need to add ‘@GeorgeMonbiot’ to many of his tweets, so the great man doesn’t miss them.

I'm glad he noticed that about RH adding @GeorgeMonbiot to so many of his tweets, as I've written about that before. It's all a bit odd.

What’s the Point of a supposedly impartial ‘environment analyst’ who – apparently – takes offence at his bosses allowing another journalist to offer views different to his own?

David says that the BBC is failing to ask questions about the potentially disastrous pitfalls in the president's proposals, focusing instead on why the UK government is (or just appears to be) 'going in the other direction'.

After outlining the case against the Obama plan, David writes:

That different perspective, of course, is of no consequence to the 8,000 journalists at the BBC. Under their bonkers ‘due impartiality’ rules propagated and enforced by the BBC Trustees, they barely even acknowledge that views that challenge climate alarmism have any validity.

Under this McCarthyite regime, speakers on outlets such as the BBC’s Thought for the Day are emboldened and authorised by BBC editors to call those who disagree with climate change alarmism simply ‘deniers’ and ignore them.   The insult by deliberate linkage to Holocaust deniers is fully intended - and sanctioned at the highest levels.

Exhibit A is an article by Roger Harrabin:

The upshot of this rigid mindset is that across the BBC, the Obama plan has been reported with reverence. This article is typical. The main question is not whether the spending of billions on wind and solar farms is lunacy – but instead, why the same cannot happen here? Oh, and whether the plan is enough to meet the demands of the arrogant law-breakers at Greenpeace. [Craig - That sounds like most Roger Harrabin articles!]

This is therefore yet another peg to attack the Conservative government. Amber Rudd, the Energy Secretary, has had the temerity to announce plans to limit the huge subsidies that go to the companies that have made countless millions out of building wind and solar farms. To so-called BBC reporters like Roger Harrabin, that’s seen purely as massive attack on climate alarmism.

The very same thing happened with the equivalent news reports from Roger Harrabin on Radio 4. I remember the news reader giving us the news about President Obama and then RH entering and talking only about how people are puzzled about why the UK doesn't do the same, oh, and Greenpeace.
Posted by Craig at 15:40