What is the Point of...Richard Black?

Oh dear, a lot of people at The Guardian aren't happy with the BBC today.

Why? Because Quentin Letts asked What is the Point of...the Met Office? from a sceptical position on Radio 4 this morning.

The author of the Guardian article, headlined What’s the point of BBC guidelines when it comes to climate change?, fumes that the programme...

...has not so much ignored the editorial guidelines as burned them to cinders in a joyous coal-fired conflagration.

Such things shouldn't be allowed!

The Guardian author still thinks, however, that the BBC does a great job overall:

Climate change has always been a difficult subject for the BBC. The science is complex, with messy uncertainties, and the political stakes are high. As I saw at first hand during my time there, the corporation comes under sustained pressure from various quarters, particularly well-connected contrarians for whom undercutting scientific institutions such as the Met Office is a time-honoured tactic. Nevertheless, the BBC generally does a excellent job, with news correspondents, current affairs presenters and science documentary makers who excel – many of whom would doubtless have helped the makers of What’s the Point, had they been asked.

That Guardian author is none other than former BBC environment reporter Richard Black - a man whose commitment to impartial, fair, fact-based reporting was very strongly doubted by "contrarians" everywhere throughout his entire BBC career.

Mr Black was regularly accused of dabbling in the black arts of environmental activism and even of breaking BBC editorial guidelines himself by people at sceptical blogs (like Watts Up With That, Bishop Hill and Biased BBC), before he eventually left the BBC and became an official member of the 'Green Blob'.

Here's an example of his early BBC work, from 1997, warning us to get our holidays to the Maldives booked sharpish. By my reckoning, we could have as little as 12 years left to go there. 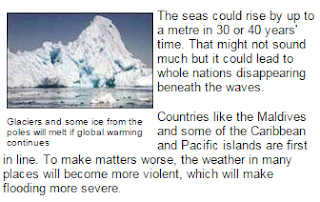