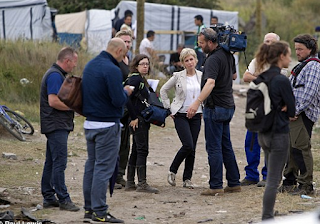 Well, the Daily Mail is giving its haters at the BBC a right good going-over tonight regarding that controversial Songs of Praise from Calais.

Aled Jones, originally mooted as its presenter, has, it seems, walked on air over to ITV; so Magnus Magnusson's daughter Sally has started where Aled didn't finish and landed in the migrant camp today instead, with just one pass (from Aled).

As their starter for ten (to mix BBC quiz metaphors) in goes the Mail, fists flying in several directions:

An Eritrean priest, who lives in the camp and runs the chapel set to feature in the episode, spoke out furiously about the decision to film the episode in Calais.

Hagos Kesete feared that filming in the chapel would endanger his family’s life, adding that the producers did not have permission to film in the camp.

The 31-year-old priest announced that he would not be appearing in the show, as he was terrified that his family could face repercussions if the images were seen in his home country of Eritrea.

The BBC was accused of wading into a politically-sensitive issue by making the decision to film at the migrant camp.

And, confirming my own original doubts about this provocative-seeming BBC stunt, the Mail punches on:

Left-winger Rev Giles Fraser, who quit as canon of St Paul's Cathedral in support of the ultra Left-wing Occupy London protests, is also involved in the episode.

He said: 'They are not illegal immigrants yet. I have no problem with the BBC filming Songs of Praise here.'

He added that the camp's church was 'the real thing'.

That sounds like our Giles all right! (and the BBC for featuring him).

This BBC stunt, however well-meaning (or otherwise) in its intention, seems to be backfiring badly, doesn't it?

Well, to quote Battery Sergeant Major Williams (famously dismissed from duty by the BBC for being 'offensive'), "Oh dear, how sad, never mind".
Posted by Craig at 22:05