I'm not at all sure what to make of the latest allegations against Sir Edward Heath. Is it the latest manifestation of another Salem-like mass hysteria or the long-overdue lifting of the lid on a shocking establishment cover-up?

I note though that my own confusion over this appears to be mirrored at this week's Spectator: On one page Charles Moore is dismissing the whole thing, on another Rod Liddle is not only giving it credence but also saying,"Well, duh!".

Is Sir Simon Jenkins of the Guardian an establishment figure? Yes, he most certainly is, but does that invalidate his latest Guardian article slamming the treatment of this late and largely-unloved-by-anyone PM? Not necessarily. (Like Charles Moore, he dismisses the whole thing.)

His piece singles out the BBC for specific criticism among media outlets (ignoring his own paper) and raises some interesting questions along the way:

However loud the mob may howl, there is no sight of a fox. Historical sex abuse is currently the nation’s favoured blood sport. Most countries apply a 10-year statute of limitation to such crimes. In Britain, the field is open indefinitely to the living and the dead. Police and BBC websites openly invite the public to name any celebrity they think might once have molested them. They will enjoy secrecy and possible compensation.

Cliff Richard remains in limbo following a highly publicised police raid last summer on his Berkshire home when he was on holiday. No attempt was made to inform him or reach him about what turned out to be a 30-year-old allegation, but the BBC was allowed to film it from a helicopter. The raid was described by barrister Geoffrey Robertson as “a deliberate act of defamation”.

The kind of thing Sir Si probably has in mind in this kind of BBC News website article (from the past week): 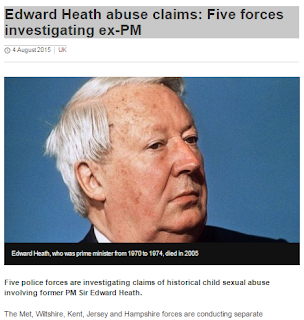 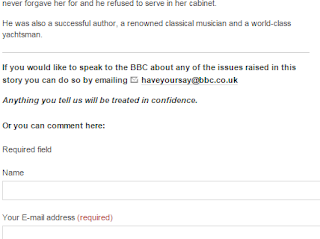 Is it wrong for the BBC to play so an active part in this kind of story (parallel to the police as it were)? Shouldn't it merely be referring anyone who makes such claims to the police?

And when BBC programmes debate the rights and wrongs of 'fishing' for possible abuse victims, will the BBC reflect the fact that it's been playing its part in that 'fishing exercise' too?
Posted by Craig at 17:23