"That carnival, of course, is a celebration of multicultural Britain. And the UK is set to become even more diverse now..." 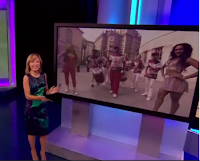 Going back to the start of today's Sunday Morning Live...

We were greeting by some lively performers before Sian Williams appeared applauding them and saying, enthusiastically:

Oh, a bit of Brazil to brighten Sunday Morning Live! Good morning, I'm Sian Williams with the Paradiso School of Samba practising for the Notting Hill Carnival tomorrow. We'll have more from them later on in the programme.

That carnival, of course, is a celebration of multicultural Britain. And the UK is set to become even more diverse now became immigration has hit record levels, Now there are more than eight million people in the UK who are foreign-born.

So has immigration made us the nation we are or eroded British values?

Show and then enthuse about something that's bright and fun, assert it's "a celebration of multicultural Britain", link it to the UK becoming "even more diverse" because of mass immigration and then pose the 'big question'. All rather 'leading', I'd say (as in 'a leading question').

Sian's first question to her panel was:


Some politicians have suggested we should be celebrating record immigration figures. What are your thoughts?

Fortunately the panel was a genuinely varied one, comprising the ubiquitous Bonnie Greer, The Moral Maze's Claire Fox, Alp Mehmet of Migration Watch and David Goodhart, director of the left-leaning think tank Demos. Bonnie and Claire are relaxed about mass immigration; David and Alp aren't - all in different ways.

(Having David Goodhart and Alp Mehmet on the programme lifted it well above the usual standard for SML. The programme's penchant for loud-mouthed flame-throwers - rather than quietly-spoken, fair-minded types - is well known. Well to me anyhow).

Sian's questions weren't wholly lacking in attempts at impartiality. She took up some points and passed them on, and interrupted both sides.

However, she definitely interrupted the anti-mass immigration side much more vigorously and sharply. David Goodhart had barely begun listing some of the downsides of mass immigration when she interrupted to say, "Although they pay more in taxes than they take in benefits." (Unfortunately for her, David Goodhart then convincingly showed her contention to be dubious at best). And Mr Mehmet of Migration Watch's first contribution received five interruptions (some of them expressed with surprising warmth by the BBC's Sian)....

....and she pursued the "or eroded British values?" part of the 'big question' by trying to steer the discussion towards dismissing the idea of British values.

Still, mustn't carp too much. This was a very decent discussion by a well-chosen panel. If only the lead-in hadn't have been quite so heavily loaded.
Posted by Craig at 16:00