The BBC, UKIP and Calais 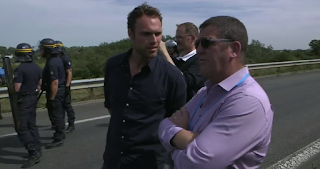 The programme presented a report from Calais from BBC reporter James Clayton (who I think I'm now officially entitled to describe as "controversial").

Newsnight presented his report as being done at the instigation of a UKIP MEP, Mike Hookem.

Whether it was or wasn't (and, obviously, like you, I've absolutely no idea), but...

Mike was shown making his point about how easy it is for the illegals in Calais to breach the fences protecting the Channel Tunnel but James (of the BBC), doing his Jon Ronson impersonation, 'innocently' noted that some people on Twitter have accused the UKIP man of acting like a vigilante and then asked Mike if he was a vigilante.

Still, Newsnight probably thought it was being 'brave' in inviting a UKIP man to feature in its report.

"You understand the desperation, don't you?", asked James.

James (of the BBC) then invited Mike (of UKIP) to please think of the children....and, predictably, an exchange followed with James of the BBC repeatedly interrupting Mike of UKIP on behalf of  the children.

An Eritrean man wants to reach his wife, already living in Britain. Mike interviews him, and then James interviews him, highlighting the difficulty of his journey. He's come a long way, says James of the BBC.

James (of the BBC) then repeatedly presses Mike (of UKIP) on whether the latter feels "sorry" for that poor Eritrean at all, asking:

How can you not feel sorry for someone who's come from Eritrea, a war-torn country....?

Well, James Clayton of Newsnight, Eritrea isn't "warn-torn" at all. It's horribly oppressive but it's not war-torn.

...an incredible journey. You can say all sorts of things. You can say that they don't have a right to enter the UK but you can't say you don't feel sorry for someone?

What would Mike do about a woman rolling in the grass? I'm not here to be a vigilante, said Mike.

Mike says that some thing are being done by the authorities to tackle the situation, security-wise, but that the problem will never be stopped until people are stopped from crossing the Mediterranean.

And on that point the report ended.

I think you might be able to guess what I think.
Posted by Craig at 22:21