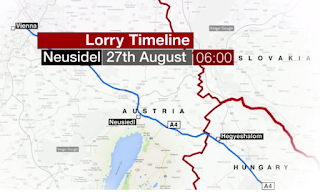 When the BBC reports harrowing stories of migrant deaths, as they did on tonight's News at Six, you'd obviously have to be morally sick not to feel any sympathy for those deeply unfortunate people.

The past couple of weeks of BBC reporting (when I've largely kept away from blogging and, to an lesser extent, BBC reporting) have (from my experience) been absolutely dominated by such stories.

On the fairly rare occasions when I've tuned in to the BBC's coverage, BBC reporters have been prominently reporting migrant 'tales of woe', adhering to the BBC's new principles of suffusing their reports with 'compassion', pace Lyse Doucet...

...and I must say that I've been, on more than one occasion, emotionally 'moved' as a result (minus the inverted commas).

James Reynold's lead report on the News at Six tonight focused on the horrific discovery of dozens of dead migrants (including women and children) in an abandoned frozen food lorry in Austria.

It was full of such compassion. James explicitly asked us to imagine how it would feel to be in the back of such a truck...

...and I have to say, watching it, I felt upset as a result. And I don't for one minute think I was wrong to do so.

Interestingly, unlike the BBC, ITV didn't lead with the migrant deaths (in Austria and the Med).

ITV lead instead with the plight of British employees, as a result of a computer glitch at HSBC, leading to lots of people not getting their monthly wages on time.

After watching the BBC, who devoted most of the first half of their bulletin to those mass deaths of migrants, I found myself thinking: "Why are ITV leading with that?"

Was I wrong to think that? Was it actually right that ITV led with something which directly effects the lives of many more British people than the (distressing) deaths of an uncertain number of migrants in Europe and the Med?

You may have a certain answer to that but I really don't think I do.

I even watched tonight's BBC News at Six with mounting anxiety.

I definitely did hear him saying that the dead people in the lorry were hard to identity and then saying that an identity card had been found proving that one of the dead people was Syrian (and, thus, a refugee from the hellish war there) before then going on to imply (and, actually, I  mean 'assert') that all the migrants in that truck were Syrian refugees. (Listen on the iPlayer while you can to prove that).

Then I heard James Robbins, in the studio, 'setting it all in context'. He conceded that some of the influx might be economic but said that most of the people attempting to reach Europe are refugees from conflict.

Then it got confusing.

James Robbins showed a map suggesting that some of the migrants come from Africa (a line, as far as I could see, from Sudan and South Sudan through Eritrea to Ethiopia) before pivoting onto a map of Syria, mentioning four million refugees from the conflict there...

...thus leaving me (as a viewer) with the distinct impression that Syrian refugees (obviously the most deserving of refugees) comprise the bulk of the present wave of immigrants crashing on Europe and the UK's shores...

...and an Austrian (centre-right) minister was then shown saying that Europe should get its act together to make things better, and Britain's fears were also reported (sounding rather trivial in comparison).

BBC reporting or BBC propaganda? You decide.
Posted by Craig at 22:55