This house is divided over Syria. (chez Sue, not the HoC) One side says bombing ISIS may not be perfect but it’s a start. The other side is sorely tempted to offer the trusty old  internet cliche: “what could possibly go wrong”?

After the BBC’s misguided optimism over the Arab Spring (which should have indicated that your shiny new Arab World was not full of right-on pro-libertarian dudes whose passionate desire for western-style democracy was only thwarted by the tyrants) and taking into consideration David Cameron’s stubborn delusion that “ISIL” has nowt to do with Islam, (which should indicate that the PM and the Home Secretary haven’t got much of a clue about Islam) the establishment’s utter failure to come to terms with reality does not inspire confidence in their plans for dealing with it.

On the other hand, ‘cutting off the head of the snake’ has a very definite appeal. But what then? Will we have to start all over again, when Al Qaeda, Al Nusra Front, Islamic Jihad, Boko Haram and all the other nothing-to-do-with-Islam jihadis start flexing their muscles?  I demand a list from David Cameron specifying precisely which groups have anything to do with Islam, and which have not.

One thing about the anti-bombing argument is potentially heartening, which is the gradual recognition by the anti-war brigade that the terrorists’ tactic of cosily embedding themselves with innocent civilians throws up a dilemma. A little lightbulb is flickering on and off in the distance. If the anti-war crowd can grasp the implications of this fundamental moral dilemma, then they might be close to understanding what Israel is facing.

Maybe when they’re seeing their countrymen being stabbed with kitchen implements or mown down in their hundreds they might get it. That is, they would if they weren’t immune to logic.

Nevertheless, they might be asking themselves whether that unsportsmanlike tactic can, or should, prevent all retaliatory activities whenever and wherever they are employed? For how long? in perpetuity? Till the end of time?
In other words, does the human shield manoeuvre automatically ensure victory for the bad guys? Or is there a point where the bad outweighs the good?
They might decide that innocent civilians caught up in this way are hostages, and in effect already sacrificed. Life as human ransom can’t be much fun. They are in jeopardy if they do and in jeopardy if they don’t, if you think about it.

What does Jeremy Corbyn’s “political” answer entail?  Bribery? Appeasement? Capitulation? Human sacrifice? A world-wide Caliphate? How does he propose this political solution would be achieved?

I noticed that even Corbyn has started using the word “Jihadi” in a pejorative tone of voice. Does he extend that disapproval to his ‘friends” or is it just for the particular Jihadis of ISIS, the criminals who have nothing-to-do-with Islam?

I see that David Cameron’s bombing campaign would be part of a broader approach, which is tantalisingly close to saying something. But what? Is he going to tackle the enemy within? Are the extremists in, say Luton, or the Rotherham, Oxford, Bradford, etc etc  nothing-to-do-withs part of the strategy?

Rod Liddle has got himself into trouble for making a flippant suggestion. (It’s a good thing I’m unimportant. It’s tough being flippant, as anyone who’s a hostage to their own flippancy will attest)

If anyone reading this is wondering what it has to do with the BBC, let me remind you of Craig’s previous post. It seems that the BBC is complicit in a kind of  ‘no-platform’ / ‘safe-space’ scenario of its own. The above was a preamble to this.

One of our commenters has mentioned Sarah AB’s latest post on Harry’s Place concerning Maryam Namazie, which addresses a more overt manifestation of the same thing, namely trying to silence people you disagree with by foul means.

If our universities and our national broadcaster follow this insidious pattern of ‘no-platforming’  with the aim of silencing vociferous opponents of radical Islam in the UK, no amount of bombing campaigns in Syria are going to solve the problem.

Everyone accepts that the media wields enormous power and influence. It can edit interviews, emote, select and propagandise to its heart’s content while the truth is slowly putting its boots on and before people start noticing that something sinister is going on. The Conservatives have been subjected to a little of this themselves, so they should realise that some of society’s current  problems are exacerbated by irresponsible conduct from some of the BBC’s ignorant and immature employees.
Should the BBC bosses give free reign to Anne-Marie Tomchak and Mobeen Azhar to edit material, cherry pick from it, and chat about it in negative terms when the unfortunate target is no longer present and unable to defend him/herself?

Maryam Namazie recounts her experience at Goldsmiths on her website and intends to post a video of the disruptive and thuggish antics of male members of Goldsmith’s Islamic Society.

Further evidence of the cognitive dissonance that has polluted academia is illustrated here: (H/T EoZ)
An American academic who belongs to Jews for Justice for Palestinians has penned a hurtful reply to an email she received from an Israeli girl. 13 year old Shachar Rabinovitch had approached her on the topic of ‘the history of the domestication of horses’, Ms. Lavine’s area of expertise.
As a former Cambridge researcher Dr. Levine must have taken some of her ‘facts’ from the BBC.  Apart from her appallingly insensitive, insulting and inappropriate response to a 13 year-old child, Dr. Marsha Levine has further disgraced herself by setting out her reasons for belonging to this organisation:

“The violence against Palestinians never stops”, the Cambridge-based former academic said. “The people who live in Gaza cannot get education, health, water. What does it say about Jews that they support that? Jews have turned themselves into monsters.”

If any of the inaccuracies in the above originated from the BBC, then the BBC should be obliged, under its charter, to correct them. We can find the truth elsewhere, but why should we have to?
The jury’s still out on the bombing, but very clearly something must be done.

It all hinges on the recognition that the flippant remark “we might as well bomb Luton” ... no, to be precise:  “We’d be as well off bombing Luton as Syria” refers to the futility of bombing ISIS in Syria without addressing the enemy within. It wasn’t a straightforward call to bomb our own democratically elected mini-caliphate.

Let’s not forget, mass immigration from the third world was deliberately encouraged by the Blair/Brown Labour party to keep them in power in perpetuity, and as they must have said at the time “what could possibly go wrong?” 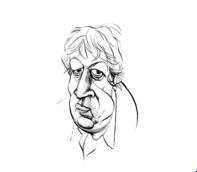 Rod gives presenter Justin Dealey and reporter Gareth Lloyd both barrels - and when you listen to their absurd setting-up of the whole thing you'll well understand why.

You really will be missing out if you don't listen to it!
Posted by sue at 16:17