“As Lemmy of Motorhead, he became known for his fast and furious bass guitar playing and gravelly voice.Rest In Peace Lemmy. A hell of a man who suffered no foolsThe band added: "We cannot begin to express our shock and sadness, there aren't words."

There aren’t words? Well, there are; all day yesterday on the BBC, Sky and, for all I know, al Jazeera and Press TV.   (p’raps not.)
Alas, poor Lemmy. I never knew him, Horatio; a fellow of fast and furious guitar noise.

On the plus side, the BBC has stopped carpet-bombing us with sad news about that infinite gravelly voice, and  on the minus side, they’ve replaced it with on-the-hour reports of historic racist remarks of Oliver Letwin. Like, all day. 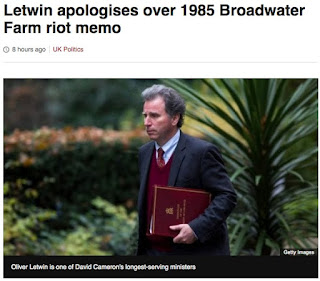 Oliver Letwin’s racist remarks were uttered in 1985 (and Motorhead was formed in 1975)
They say the past is a different country.  Historic events need to be put in context, but hey, they won’t be.

What terrible thing did Oliver Letwin say in 1985?

“In a newly-released memo, Oliver Letwin - then adviser to Margaret Thatcher - blamed unrest on "bad moral attitudes".
He also dismissed plans to encourage black entrepreneurs, saying they would set up in the "disco and drug trade".

What is he like? A Tory Toff or something?  “Disco and drug trade” how quare. “Rappers  and dealers” or something contemporaneously cool, surely.

The Broadwater Farm riots were apparently sparked off by the death of Cynthia Jarrett, a black lady who had a fatal heart attack when four policemen raided her home looking for stolen property, which they did not find.

“Mrs Jarrett's death sparked riots in which more than 230 police officers were injured and PC Keith Blakelock was killed after being stabbed 43 times.”

This event was a kind of British precursor of the current race/police problems in the US between black communities and allegedly trigger-happy racist cops.

In 1985 present-day politically correct inhibitions on speaking (wrong) words were in their infancy. Of course every generalisation covers the odd exception or two, but generalising over certain demographics was fairly acceptable with the proviso that certain indicators were present. Behavioural patterns concerning crime, attitudes to police, defiance of authority, disregard for convention, lack of social responsibility for example.

Not now.  Now it’s racist to jump to conclusions, or for that matter, to come to any generalised conclusion at all. Not cautiously, not stealthily, not with overwhelming evidence, a smoking gun and a trail of bloody fingerprints all the way to X-marks-the-spot.  Whatever your lyin’ eyes say, thou must not generalise.

“Mr Letwin said parts of the private memo were "badly worded and wrong".
His statement came amid mounting calls from senior Labour figures for him to apologise.The party's deputy leader, Tom Watson, said the comments were evidence of "an ignorant and deeply racist view of the world", while MP Chuka Umunna said attitudes in the memo were "disgusting and appalling".

What was actually wrong, though?

I mean Diane Abbott, whose opinion was sought on the airwaves continually throughout the BBC’s Oliver Letwin day, was the very one who made that infamous generalisation about ‘black mothers”. (The best mothers)

What is Chuka Umunna on about? What does Chuka think about the moral attitudes of black communities in 1985? What does David Lammy think is behind  “the appalling relations between black youths and the police". Chicken and egg, maybe, but if they were ‘appalling’ that’s a generalisation and a half, with strongly racist implications.
“Social decay” Lammy cites, yet:

"The root of social malaise is not poor housing, or youth 'alienation', or the lack of a middle class," they wrote in the document, which has been released by the National Archives.the memo states:"Lower-class, unemployed white people lived for years in appalling slums without a breakdown of public order on anything like the present scale; in the midst of the depression, people in Brixton went out, leaving their grocery money in a bag at the front door, and expecting to see groceries there when they got back.

"Riots, criminality and social disintegration are caused solely by individual characters and attitudes. So long as bad moral attitudes remain, all efforts to improve the inner cities will founder."

“But a government source told the BBC it was a "historical" document "written by a policy team whose main task was to challenge orthodox views".  Quite so.

Here’s a blog on a related topic in the US. "How the BBC conducts an interview"
It includes an egregious example of the BBC’s loaded questioning. This time it’s Razia Iqbal  interviewing Marin Alsop, the American conductor who recently performed at the proms.

“Alsop was speaking about the mentoring programme she had introduced to promote the study of music among Baltimore’s deprived (mainly African-American) community. Alsop’s comments about the success of the programme prompted the following extraordinary and revealing statements from Iqbal:


“This would surprise a lot of people for whom Baltimore means the television series The Wire or the Baltimore that people see in real life depicted in our news bulletins of young African-American men being gunned down by the State. I wonder how you reconcile those things in your mind?”


The ‘young African-American men being gunned down by the State’ is clearly a reference to the Freddie Gray case – see here for BBC reports on that – a death in custody in the back of a police van, not by shooting, for which an African-American officer was tried for manslaughter and who faces a retrial.

Here the sweeping generalisation is being made by the BBC’s Razia Iqbal. In this particular case the policeman / perpetrator also happens to be black. But it’s a generalisation about relations between African Americans and the state / police, and the implication is that it’s a race issue, and let’s politely say that Razia is not on the side of the police.

......Marin Alsop takes Iqbal’s cue and responds with the following, which seems to be an equally jaw-dropping, assertion:

“It’s heartbreaking that we haven’t dealt with these issues, that it requires violence, which I think it does require, to be honest, to change this equation. Inequality and injustice is unacceptable. I mean sadly this has been the most violent year we’ve had in Baltimore, we’ve had over 300 people murdered. it’s a cry for help.”