A 'liberal interpretation of the facts'? 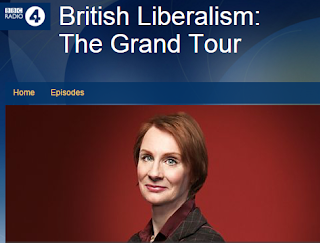 I was intrigued by a comment over at Biased BBC about Anne McElvoy's just-completed series about British liberalism on Radio 4, British Liberalism: The Grand Tour:


Thoughtful
December 18, 2015 at 2:00 pm
http://www.bbc.co.uk/programmes/b06s1b8w
The Limits of Liberalism
Radio 4
Some appalling lies being told about the Rushdie book burning by Fascist Muslims. It is difficult to hear the denial of reality & rewriting of history by those lefties such as Anne McElvoy.
It did not come as a surprise though to hear that some of the Fascist (Il)liberals actually wanted Rushdies book banned !

The relevant passage from the programme (which was very interesting overall) runs as follows:

Anne McElvoy: In 1988 Salman Rushdie published his novel The Satanic Verses. For many British Muslims the novel was deeply offensive. Frustrated by the failure of protests to have the book banned a group of Muslims gathered in a square in the centre of Bradford. They registered their outrage by burning a copy of Rushdie's novel.

All this takes us back 300 years to 1683. We began this series with the burning of books condemned for containing 'damnable doctrines' under the rule of Charles II. It's easy today for a liberal to pick a side in that struggle but in the book burning of 1988 liberals found themselves facing a trickier dilemma. These book burners were not powerful representatives of an authoritarian state; they were members of a relatively powerless minority who believed that they had no other way to get their voice heard. One way or another though they still found themselves using the symbolism of Locke's tyrannical opponents.

Professor David Feldman: In terms of liberalism the controversy over Rushdie's book raises two issues: one is the issue of freedom of speech and the other issue is about toleration - or more precisely the degree of consideration which ought to be given to others' sincerely held beliefs.

Anne McElvoy: The Bradford book burners were a tiny minority within a minority, but for liberals it brought to a head some of the contradictions they'd long been struggling with.

Professor David Feldman: The Rushdie Affair is extremely painful for people who identify as liberals, I think, because liberals had been more likely than anyone to oppose immigration restriction in the 1960s and early 1970s, they had promoted the Race Relations Act, they had opposed Powell and Powellism, and they had affiliated their opposition to racism with their support for a whole other set of liberal freedoms: abortion law reform, reform of the law on obscenity for example. The Rushdie Affair showed that matters were not so simple and was extremely divisive for liberals. Some secular liberals did indeed support those within the Muslim community who wanted to ban the book. Others did not.

Anne McElvoy: Liberalism is interested in minorities just as much - or more than those who hold power but giving priority to group rights can end up intruding on the private sphere. And though it may encourage us to behave better it's a funny way for a declared liberal to go about it if it ends up coercing us to think or speak within certain parameters.

Now, I certainly agree with Anne McElvoy's point that "it's a funny way for a declared liberal to go about it if it ends up coercing us to think or speak within certain parameters" and I think that makes it clear where she stands on the burning of Rushdie's book, but was Thoughtful correct nonetheless about the "appalling lies" being told here?

Well, whether they are really lies or merely inaccuracies, Anne's outlining of the Rushdie Affair doesn't seem especially accurate to me either.

For starters the first burnings of the book in the UK didn't take place in Bradford in frustration at previous protests' failure to have an impact; they took place in Bolton at the very first UK protest against The Satanic Verses.

And as for the book burners being "relatively powerless", a recent book - The Rushdie Fatwa and After: A Lesson to the Circumspect by Professor Brian Winston of Lincoln University - makes it plain that the people behind the protests were far from powerless. Leading, well-connected Muslim businessmen led the highly organised charge: 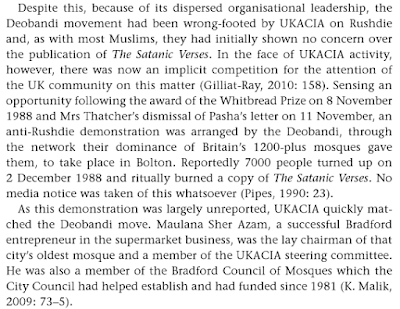 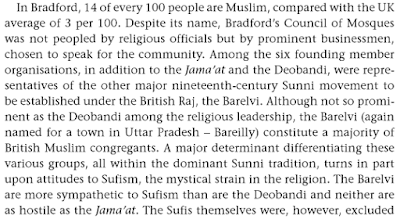 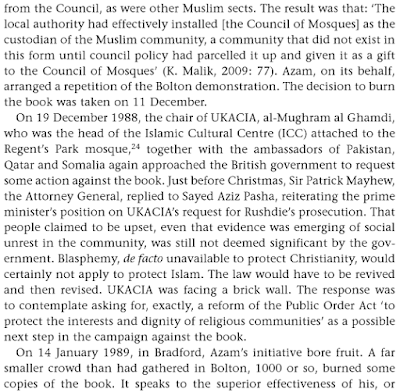 Anne McElvoy's 'liberal interpretation of the facts' does seem open to question here, doesn't it?
Posted by Craig at 17:36