I see the Guardian is giving several dozen nudges and a whole batch of hints that nasty old Rupert Murdoch and his Tory puppet George Osborne jointly cooked up the deal that did for the poor old BBC earlier this year: 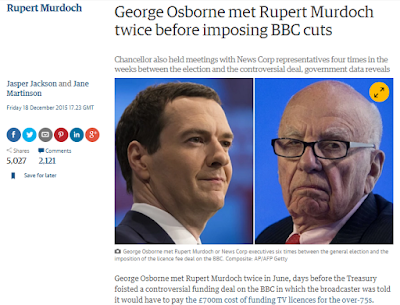 'There's no smoke without fire' seems to be the message behind this less-than-entirely-convincing piece of Guardian journalism which lists various dates and various contacts with various media types, including Ol' Rupert, and allows its readers to join the dots

Now, any science or statistics fans will know that correlation does not imply causation. So the fact that George met Rupert twice before the BBC deal was brought about doesn't necessarily mean that Rupert put George up to it.

That, of course, won't stop some BBC types from joining the Graun in their nudge-nudge-wink-winking over this.