Over on Harry’s Place, Sarah AB has posted an interesting piece:

“Earlier this week I posted on the disgraceful treatment Namazie received from Goldsmiths ISOC.  As many will have already seen, this prompted surreal solidarity messages from Goldsmiths’ LGBT and feminist societies.  Surreal, because the solidarity was for the ISOC not for Namazie.”

I had to have a look on YouTube, where the video of the whole event has been uploaded. You can view it here. 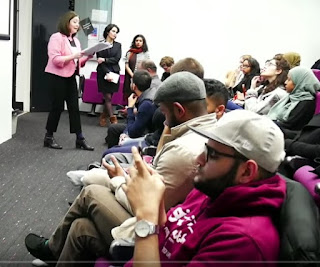 While I think Namazie’s presentation was flawed, her bravery was admirable. But surely no-one in their right mind could accuse her of saying anything extreme.

She seemed to be merely listing a series of outrageously oppressive and vicious practices that are being carried out in Islamic countries. In particular, she explained the difficulties faced by any Muslim who wishes to leave the religion, and pleaded for apostasy to be a matter of choice, and not punishable by ostracism or death. Fair enough, one might say, but evidently most of the young lads sitting at the front in the audience disagreed; and in varying degrees, so did several of the sisters.

Are these adult infants actually students though? How did they ever manage get a place in a university? Their attention spans were obviously next to zero, and their loutish manners were as disruptive as any maladjusted primary-school child.  Is that what students are like these days? What could they be “studying”? Chemistry? Aviation? Internet security?
Seriously.