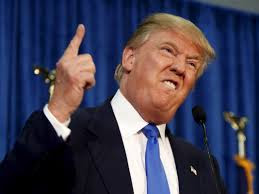 All this ridicule and condemnation over Donald Trump’s “We have places in London and other places that are so radicalised that the police are afraid for their own lives” is just too, too, ‘deja vu all over again’.
This time, because Trump is a potential POTUS (well, we all laughed when Jeremy Corbyn put his name forward)  - this time round the response isn’t so much ‘amused’ as ‘indignant’.

However, quite a few people don’t think his remark is all that far-fetched.

It does occur to me that even if the police don’t actually fear for their lives, there must be a reason why they haven’t been doing enough to enforce existing laws to prevent illegal cultural practices in areas where they are rife.  Forced marriage, honour killings are still happening, and this report says:

“An estimated 137,000 women in the UK are affected by female genital mutilation (FGM). However, the true extent is unknown, due to the "hidden" nature of the crime.

One might think the police are paralysed by fear, and that their biggest fear is of being thought racist, or in this case institutionally Islamophobic.