The results of the Spanish election are coming in and, reading the main article on the BBC website, I'm officially confused.

This is what it presently says (a screenshot): 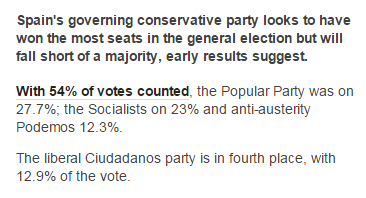 However things eventually turn out (and Twitter is presently suggesting that far-left Podemos is in third place, well ahead of the centrist Ciudadanos), what's puzzling me here is that this BBC article [one of the lead articles on the BBC News website at the moment] presently says that "anti-austerity Podemos" is on 12.3%, well behind the main centre-right and centre-left parties, and that the "liberal Ciudadanos party" is "in fourth place" with...er...12.9% of the vote.

Isn't 12.9% more than 12.3% though? (If Rachel Reeves from Countdown is available, I would love to discuss the matter with her to make sure). Wouldn't that put Ciudadanos in third place and Podemos in fourth place?

I have a strong feeling this BBC report will prove wide of the mark - though even if it doesn't it's still perplexing.

Still, it doesn't look as if pony-tailed Podemos will come out clearly on top after all, as the BBC spent so much time anticipating might happen in 2014 and early 2015.

Time will (shortly) tell though.
Posted by Craig at 21:10