This morning's Sunday on Radio 4 was a special focusing on the relationship between religion and art and had a guest presenter, freelance writer Cole Morton.

I thought Cole did a very good job and made for a refreshing change.

I laughed, for instance, at his obvious bewilderment at one of artist Maggi Hambling's more nebulous assertions about art: "Hang on. Life and death at the same time, that's what art's all about. What do you mean?"

It was all very interesting - and quite thought-provoking (even if quite often in an 'eye-rolling' kind of way).

There were interviews with people from the Church, with artists and with the odd academic - specifically Sunday's favourite academic, Linda Woodhead from the fine University of Lancaster (or the University of Morecambe, as I like to think of it).

I drew several instant, doubtless deeply superficial conclusions about what church art is about these days from what they said today:
The problem with talking about art on the radio is...er...the obvious one: you can't see the pictures. But, out of curiosity, I Googled them all.

All of the high-profile modern artists listed above produced exactly the kind of artworks you'd have expected from them. Antony Gormley, for example, did another of his life-sized-men for Winchester Cathedral (which looks quite effective to me)...: 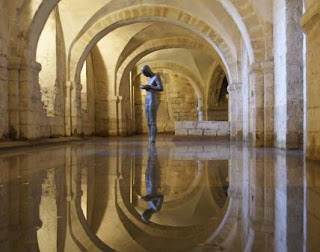 ...and Tracey Emin produced the following neon sign above the door at Liverpool Cathedral (which, however effective it may be [especially as a Scouse kind of thing], doesn't enhance my appreciation of her art): 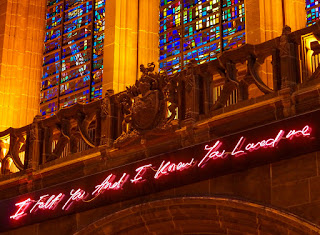 There was a discussion of more traditional art at the start of the programme as Cole interviewed Dr Aaron Rosen of King's College, London about his top three religious works of art (to put it crudely). Dr Rosen listed:

Piero della Francesca's The Baptism of Christ, Poussin's Adoration of the Golden Calf and Cezanne's The Grand Bathers (even though that's not a traditional religious work of art either).

Here's where having a blog comes in handy because I can now take issue with Cole Morton for some of his his descriptions of Piero's Baptism - for no one's benefit other than my own. 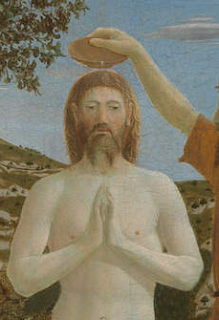 And I don't think the angels were grimacing either. That's not the right word at all.

Quite what the right word is to describe their unsmiling expression though I really can't think. Can you?

(All I know if that if three of the angels at the party I was attending had that look on I'd strongly suspect the party wasn't proving to be a roaring success). 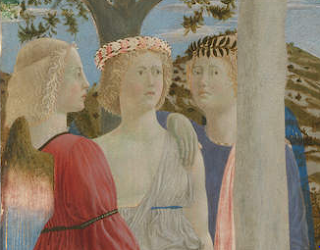 We should do more pointless, half-baked posts about art here, shouldn't we? (Is that a 'Yes', I hear?)

Oh, and Sunday also featured an interview with a Muslim graffiti artist called Mohammed Ali - the Muslim Banksy apparently (not to be confused with the boxer of the same name).

His art speaks to the street at street level, making social and political points and often using Islamic motifs and Arabic writing. Here's an example of his work: 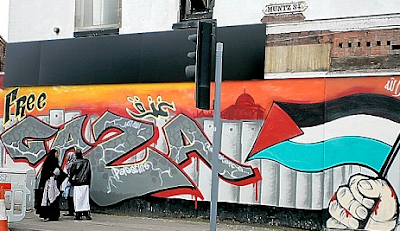 I have to say, his spray-painting of the women at the bottom left hand corner of the painting is rather good, in it? Very realistic. It's almost as if you're actually seeing women from Hamas-run Gaza before your very eyes, dressed in the misogynistic clothes demanded of them by the oppressive Hamas patriarchy. Chilling.