Donald Trump’s bizarre image must be a liberating thing. If your hair has its own webpage dedicated to its history 1976 -2015, your dignity will realise it has nothing left to lose.

This absence of self-doubt, freedom from inhibition, or whatever psychological condition Trump enjoys enables him to exult in that ‘anything goes’ abandon that people find so intriguing.
At least it has enabled Trump to say what many people are thinking, but couldn’t possibly take the risk of saying out loud.

So when they quoted ”Donald J Trump is calling for a total and complete shutdown of Muslims entering the United States”, and left out  “until our country's representatives can figure out what is going on" they were being deliberately mischievous. They knew what they were doing alright.

The media has its own special way of leaving out the qualification, i.e., failing to quote the vital part of the sentence, phrase or paragraph, which puts the contentious soundbite in a less explosive context. Cherry picking with malice.

They’ve done it with Jeremy Corbyn to such an extent that I actually felt sorry for him at one stage - in particular when he was quoted as saying that Osama Bin Laden’s  demise was ‘a tragedy’. Nice sound-bite, but not exactly the whole shebang.

The Telegraph has really gone to town with this. It’s beginning to look as if the Telegraph doth protest too muchio.
They’ve reproduced all those high profile persons’ Tweets and topped the whole thing off with one of those “Who said it:” quizzes like the one they set up yesterday, where the entities pitted against one another were ISIS and Stop The War coalition. (It was impossible to tell).
This quiz pits Trump against Adolph Hitler. I haven’t taken it; I got 5/10 on yesterday’s quiz by attributing most of them to StWC. They were interchangeable, obvs., and no doubt these are too. 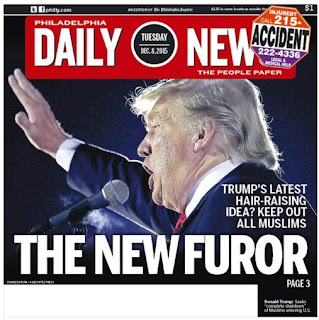 Not that I’m defending Trump. He’s far too ridiculous to be defended, but  'reprehensible, prejudiced and divisive' is too crude a response. Crude responses are all we get from people these days. That’s what so depressing. Political correctness is stifling genuine discussion. We are frightened of Islam and we fear that what we’ve been seeing is only the tip of the iceberg.

Many an ordinary person is NOT thinking Trump’s plan to put the brakes on Muslim immigration is reprehensible prejudiced and divisive, but rather that Hillary’s Tweet would be much more appropriate if directed at Islam.
Posted by sue at 15:03