Double Standards all round

The other day I expressed disappointment at the fact that MPs debating foreign affairs seemed woefully ignorant about the topic under discussion.   Few of them appear to know much (or anything at all) about the Palestinian Authority’s routine practice of glorifying indiscriminate acts of  terror against Israeli civilians.

The Palestinian leadership officially honours terrorism. Palestinian Media Watch documents examples of the PA inciting  individuals to take up kitchen knives to stab Jews or mow Israeli  pedestrians down with vehicles. This, and various street-naming activities in honour of terrorists ‘martyred’ while perpetrating violence against unarmed civilians, goes on with the official approval of Fatah/ Mahmoud Abbas, Israel’s ‘peace partner’.

Then I read this: "PMW findings used to confront PA officials"

I have to say that I hadn’t heard of some of these characters, and judging by their Twitter timelines, they didn’t seem to have been particularly affected by what they saw and heard. They barely mention the visit as far as I can tell.

“PRIOR TO the dinner on Sunday, following a presentation by Itamar Marcus from Palestinian Media Watch, Dialogue participants went to Ramallah to meet with Palestinian Authority Prime Minister Rami Hamdallah and the PA education minister, who were asked about the naming of a girls high school after a terrorist, Dalal Mughrabi; sporting events named after terrorists; branding anyone who supported peace initiatives through sport as traitors; and the preaching of hatred through the education system.”

“The Palestinian Education Minister Dr Sabri Saidam told SBS News he had expected the discussions to focus on education, but was surprised by the group's "explosive, blunt and rude" questions about Palestine's education system.He said both Australian and British MPs asked the offensive questions."There was a lot of incitement I would say on behalf of the delegation meaning or implying that the Palestinians are the ones terrorising Israel when we have been subjected to the longest occupation, as I said, of modern times," he said.

That is a little bit hilarious. The men who were accused of incitement threw the exact same accusation back at the accusers! How unimaginative and how typical.
You’d think that unpleasantness would have made some impression on the delegation, but if it did, I found no indication of it on Twitter.
Oh well. Next time there’s a debate on the Middle East maybe one of these gallivanting MPs will speak up on Israel’s behalf. This might be awkward if any of them needs the “Asian” vote to stay in office.
With the exception of Eric Pickles, who does occasionally come out with some positive pro-Israel remarks, I doubt if they will risk airing such unfashionable views in front of the children constituents. 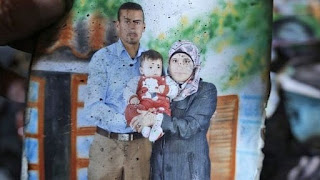 Meanwhile the BBC is going overboard with stories like this , and the Telegraph chooses a rather alarming headline for this story, which the Times of Israel  also tackles using the somewhat sensational headline: "Head of Extremist Jewish Group calls Christians "Blood-sucking Vampires"
but puts into context with the following strap line:

“In response to Gopstein’s remarks, the Israel Religious Action Center called on Israeli legal authorities to launch a criminal investigation into what it deemed to be the Lehava leader’s incitement to violence against another religious group.

“Bentzi Gopstein is capable of doing anything in order to incite against anyone not like him — Arab Muslims, Christians and others, while using blunt language and calling to violence,” Orly Erez-Likhovski said in a statement posted on the group’s Facebook page.

“Unfortunately, against this blatant incitement, accompanied by unruly violence, there’s deafening silence by law enforcement,” she said, calling on Attorney General Yehuda Weinstein to put Lehava leaders and others who incite to violence in the dock”

The media, in other words, are keen to amplify atypical (Israeli extremist) views in order to cast Israelis as villains, but are suddenly overcome with crippling shyness over blatant incitement, glorification and celebrations of acts of violence when it emanates from mainstream Palestinians, officials, ministers of education and religious leaders.
If delegations of MPs can go there and see for themselves what’s happening but maintain a deathly silence when they get home, it’s more than pathetic. 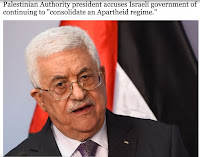