The BBC News website has updated the results and it looks as if Twitter had it right after all and that the BBC has been firmly behind the curve. Look at the Podemos percentage and compare it with the previous screenshots: 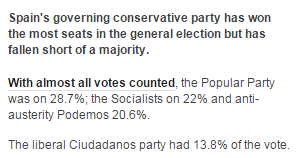 It's starting to look like social media 1: BBC 0 here.

P.S. Damn it! I was hoping the BBC had it right here! Bloody BBC!!!

P.P.S. (22.29) Oddly, Fraser Nelson at the Spectator had been trumpeting a Podemos-provoked earthquake two hours ago, going off an exit poll.

Hmm, I think I'm still preferring social media reporting here. That said, that Speccie piece is looking better than the BBC's reporting (at the moment).
Posted by Craig at 22:11