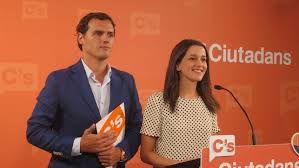 I know it's probably not a major point but it is one I've mentioned before (about a month ago) and one that intrigues me, so here we go again...

Up till about the Spring of this year, the BBC's coverage of Spanish politics focused to a striking extent on Spain's far-left, populist, anti-austerity answer to Greece's Syriza, Podemos, led by the pony-tailed political science lecturer Pablo Iglesias. The party was sweeping ahead in the polls and might even win the next general election, apparently, and Pablo was all over the BBC.

What we heard much less about on the BBC was the centrist/centre-right, anti-Podemos, anti-Catalan independence Ciudadanos (Citizens) and their pony-tail-free leader Albert Rivera.

The BBC seems to have missed their spectacular rise from almost nowhere. They now tend to come second in polls behind the ruling centre-right People's Party - and have done for many, many weeks now - with the centre-left PSOE running just behind them.

And the BBC also seems to have missed the fact that, according to most polls, pony-tailed Podemos has bombed in recent months, usually coming in fourth place, behind the PSOE.

The revolution in Spain appears to be over, folks. Straight-laced haircuts seem to be back in fashion there.

Or so it seems.

The general election in Spain is very close now, so we'll soon find out one way or the other.

And talking of political leadership, what do Donald Trump, Jeremy Corbyn, France's National Front, Syriza and Podemos have in common?

The answer was clearly meant to be that they represent surging-ahead, anti-establishment ('populist') movements.

The only point of this post is to note that Gavin included poor, fallen Podemos here; thus, I think, proving the point of my original post on this subject - that the BBC has well and truly taken its eye off the ball as regards Spanish politics.

As I wrote a month ago:

Gavin Esler still, obviously, thinks that Podemos are in contention to be the Syriza of Spain and hasn't noticed that their bubble seems to have well-and-truly burst.

Maybe Dateline needs a few Spanish panellists. Or BBC presenters needs to check up on the latest news more.

Or maybe all the polls, suggesting a possible People's Party/Ciudadanos coalition are wrong and romantic left-wing dreams for a Podemos victory or a PSOE/Podemos coalition might still come true.

We'll see - though if it's the 'boring' former result I suspect we won't see too much of it on the BBC!
Posted by Craig at 22:27