Roger Through the Looking Glass


Having taken a few days break from blogging and then, just as I was about to start blogging again, losing internet access (along with everything else, power-wise) for three days thanks to feisty Storm Desmond, and then having to do lots of extra hours at work to mop up (figuratively-speaking) after Storm Desmond, I really do feel a long way behind the curve at the moment.

From what I can see, all I seem to have missed vis a vis the BBC is Storm Donald and Storm Tyson.

(Tyson Fury, as you may know, lives in the much-loved seaside town of Morecambe and can often be seen running along its exceptionally beautiful promenade. If he'd been at home last weekend he could have missed out on some of the furore by dint of also having no internet access, as {pace Einstein} no internet = no Twitter).

Over at Biased BBC, however, there's also been Storm Roger - a series of posts by Alan named after - and going after - the BBC's environment (activist) analyst, Roger Harrabin.

The average human breathes out around 2.3 pounds of carbon dioxide per day. Roger, thanks to the Paris conference, has been breathing out much higher levels this week. Dangerous amounts it seems. So much so that (rumour has it) the conference even considered imposing global limits on the number of reports he ought to be allowed to emit within a calendar year, for the sake of the planet.

Being so busy in Paris (so far as I can see), he's not had much time to 'analyse' the flooding in Cumbria and the effects of Storm Desmond on Lancaster and Morecambe, though he has had time to pop out the odd re-tweet, such as: 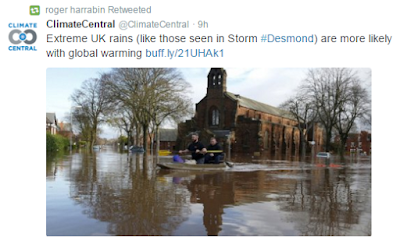 The BBC's Roger Harrabin was named by Quentin Letts of the Mail as the stirrer-in-chief behind the 'campaign' to get his amusing Radio 4 programme about the Met Office censured by the corporation:

The Met Office itself was unfazed but the eco-lobby, stirred by BBC environment analyst Roger Harrabin, went nuts. I was accused of not giving a proper airing to ‘prevailing scientific opinion’. Apostasy had occurred. I was duly flogged on the Feedback programme.

This week the BBC duly censured Mr Letts and his BBC helpers, publishing a 20-page denunciation of them and then censoring the programme by removing it from the iPlayer.

That "I was duly flogged on the Feedback programme" stands out so strikingly this weekend because this week's Feedback also aired grievances about the BBC's output vis a vis global warming - namely complaints that the BBC didn't do enough to link Storm Desmond to man-made climate change.

That remains one of the problems of Feedback. We can't tell whether it was playing fair or not.

Did just two or three listeners complain to that effect, as appeared to be the case? Or was their a large sack of complaints? Was the programme faithfully and fairly reflecting its listeners' complaints, or was it skewing them in favour of its own agenda?

I did note that one of the complaining 'Radio 4 'listeners' did explicitly acknowledge the fact that she's also an (unpaid) environmental campaigner. Were most or all of the other complainants activists too?

Whatever, Feedback listeners were then treated to the frankly bizarre spectacle of Roger Harrabin being grilled by Roger Bolton and having to defend the BBC against charges that the corporation was underplaying/'denying' man-made climate change in its coverage of the recent storm!

Given that Roger Harrabin usually faces criticism for forcibly inserting claims of man-made climate change into report after report after report, however questionable those claims might be, this felt rather like Feedback in Wonderland to me.

Even weirder, Roger H ended up sounding less like an environmental activist here than Roger B and his merry band of Lincoln-green-clad so-called 'Radio 4 listeners'. 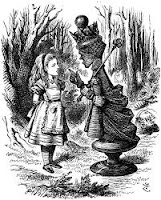 Here is how Roger Bolton began the programme.

(Please put down any cups of coffee you may have in your hand before reading):


Roger Bolton: Hello, For many listeners it is obvious the disastrous Storm Desmond is the result of climate change. So why doesn't BBC News say so?


'Radio 4 listener': They don't seem to put any urgency into reporting this issue in connecting it with weather and all the changes in the world. Well, I did end up thinking, you know, are the BBC climate change deniers themselves really?